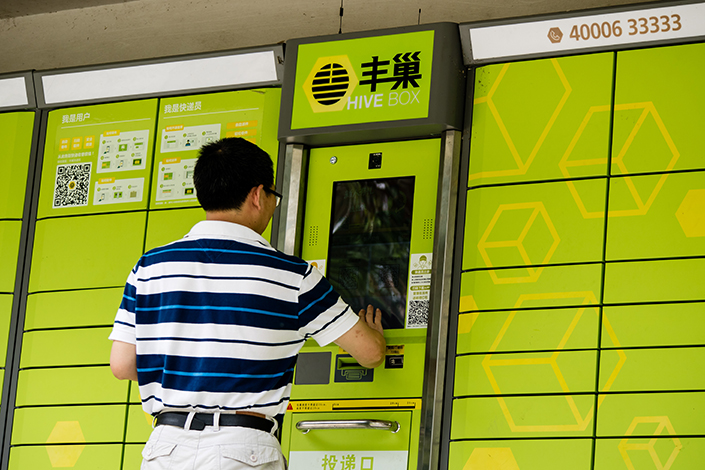 The clash shows how big names like SF Express may be gaining the mass to counter demands they consider unreasonable from Cainiao Networks, which controls huge influence in China’s massive e-commerce market due to its close Alibaba ties, analysts said. Alibaba currently controls more than half of China’s e-commerce market.

Cainiao is 47% owned by Alibaba Group Holding Ltd., and is used by the thousands of merchants on Alibaba’s Tmall and Taobao online marketplaces to deliver purchases using private couriers. More than 80% of shipping orders by express couriers in China were generated through the network in March, according to Alibaba’s latest quarterly earnings report.

SF Express is a member of the Cainiao network, but on Wednesday broke with a previous arrangement when it began refusing to share information on orders processed over its own separate network of package drop-off and pickup stations mostly in residential buildings.

Prior to SF’s Wednesday decision, the courier had previously shared a range of data from its Hive Box service at Cainiao’s request, including information about orders that were not placed through Alibaba, said spokesperson Yu Ruomu. A Cainiao spokeswoman said the company didn’t request data unrelated to its SF relationship.

In response to SF’s move, Cainiao has removed the courier from its list of delivery companies for Taobao merchants. Cainiao added in a statement to merchants that it is currently “negotiating terms” with SF Express.

Seeds of the recent dispute were sown long ago, as Alibaba aspired to create a logistics platform to help secure its near-monopoly in e-commerce, analysts said. But now some of the many Cainiao partners are feeling uncomfortable at the network’s market-dominating position, they said.

“SF is now standing its ground, as giving up data would be handing over its lifeline, relinquishing control over its own business. SF would obviously not concede,” said Cao Lei, director of the China E-commerce Center. “Cainiao has been hungrily extracting the core data of logistics platforms, data which would make it much more valuable as a company.”

SF isn’t the first company to feel discontent with Cainiao’s demands for data, but is the only one confident enough to stand up to the giant, said Liu Peng, a consultant in the logistics and food delivery sector.

SF is less reliant on Alibaba partly because it gets much of its business from large corporations, and depends on Alibaba-affiliated platforms for less than a quarter of its deliveries, one industry observer estimated. The courier may be getting even more confident following a wildly successful backdoor listing in February, which made it the most valuable logistics company in China.

The tussle even alarmed the nation’s stodgy post office, which worried over highly perishable fruits that might fall foul if they couldn’t be delivered in timely fashion by SF Express. “Both sides should stay reasonable and seek the common ground,” urged the bureau, reminding both companies not to lose perspective on consumer interests.