By Huang Kaixi and Song Shiqing 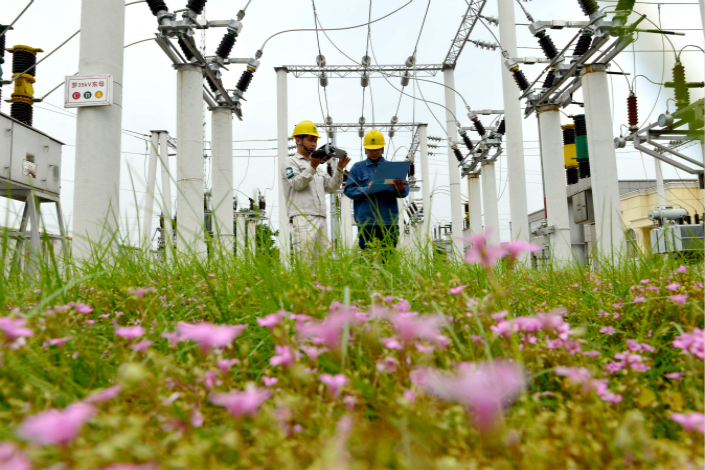 A central government pilot program has cost State Grid Corp. billions of yuan of revenue in the first half of the year. Above, State Grid technicians check circuits at the Luolou transformer substation in Xiayi county, Henan province, on June 4. Photo: Visual China

(Dalian) — Changes to China’s electricity pricing policy have cost State Grid Corp. 56 billion yuan ($8.23 billion) in revenue in the first half of the year, its president said, adding that manufacturers were able to pay less after they began purchasing electricity directly from the country’s power generators.

The loss was a result of a reform pilot program by the central government that aimed to cut electricity prices, said Shu Yinbiao, president of State Grid, the country’s major power distributor.

The trial program, launched in 2015, shook up the country’s power pricing system by taking away electricity price-setting rights from state-owned power grid companies, many of which in the past had used their respective monopoly statuses to set unreasonably high prices.

Despite the decrease in revenue, national or provincial grid companies could expand their market share by improving their efficiency as power consumption was expected to grow following the drop in electricity prices, Shu said at the Summer Davos forum in Dalian.

Under the market-oriented reform, power generators — companies with power-generation plants — were given more flexibility with price-setting. They were allowed to sell electricity directly to manufacturers through trading centers, where users could choose freely.

“China has set up 28 provincial or national electricity trading centers this year, and it has been very effective in bringing down electricity prices for industrial users,” Shu said.

The pilot program has also been focusing on how to better adjust prices based on consumption level. For example, during off-peak periods at night, wind-power generators may offer their energy at extremely low prices, with each megawatt costing several fen, or hundredths of a yuan. Such a price drop would be prompted by the need to reduce waste, or energy curtailment, as there is no method to store electricity generated from wind turbines.

After a two-year pilot program, China will soon unveil a set of more mature rules that can meet market demand in a bid to regulate the electricity trading process, Shu said, without offering a detailed timeline.

The pilot program, which was implemented in 12 provincial-level governments last year, was slated to expand nationwide by the end of 2017, the National Development and Reform Commission said last year, the government-run China Daily newspaper reported.