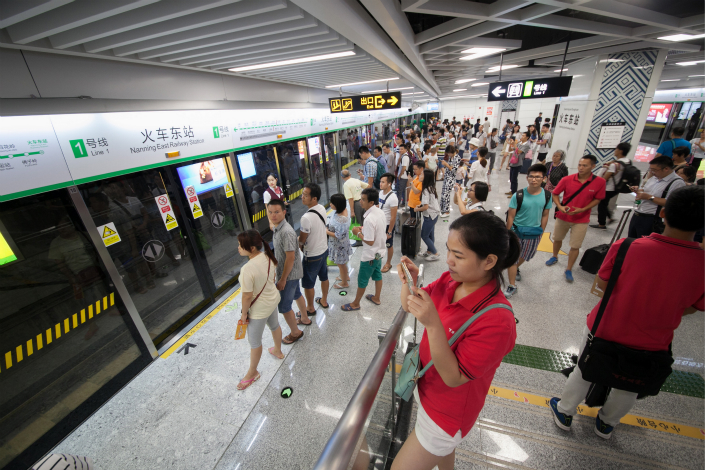 Government agencies have issued a guidance document calling for existing urban transportation systems to integrate with new commuter railways. The move is a response to the exploding suburban populations in major cities. Photo: IC

Commuter trains radiating from China’s major urban centers could cut travel times to suburbs to under an hour by 2020, according to a guidance document issued by multiple government agencies Wednesday.

The document, published by the National Development and Reform Commission, Ministry of Housing and Urban-Rural Development, Ministry of Transport and China Railway Corp., encouraged city governments in regions like the Yangtze River Delta and Chengdu-Chongqing area to incorporate nearby suburbs with populations of at least 50,000 into metropolitan public transport systems.

In other parts of the world such as North America and Europe, commuter rail services, which travel longer distances to suburbs and are usually above ground, supplement subways and bus lines.

But mass transport in China’s large cities has for a long time been confined to urban cores, while other railway lines, as part of greater regional networks, make few stops outside of city centers.

Since 2000, however, the populations of the suburban districts of cities like Shanghai and Beijing have exploded, with more people living in Beijing’s outer districts today than in its urban core.

Wednesday’s document called for new forms of cooperation between city governments and railway companies, which could mean that more cities will decide to merge parallel public transportation with railway systems.

The national railway operator oversees a huge rail network and has no incentive to reduce peak-hour congestion in cities by running commuter trains that make more stops than normal intercity lines, Zhao said.

Still, integrating railways into public transportation networks will meet the growing needs of Chinese cities, Zhao said, though doing so will causes fares to fall, making it difficult for operators to increase revenue.