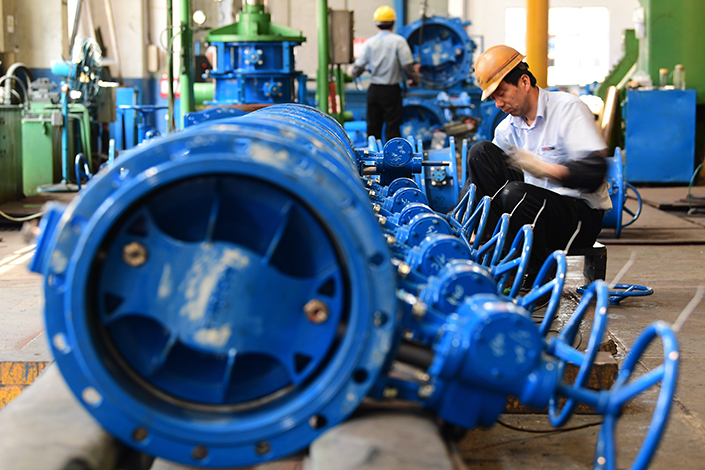 China’s manufacturing PMI rose to 51.7 in June, its second-highest monthly reading of 2017. Above, a worker at a valve manufacturer assembles a flange butterfly valve on May 26 in Jiangsu province. Photo: Visual China

China’s official manufacturing purchasing managers index came in at 51.7 in June, accelerating from 51.2 in May, according to the National Bureau of Statistics, which released the data jointly with the China Federation of Logistics and Purchasing, a government-linked industry group. The June reading beat a median forecast of 51.0 by economists polled by Bloomberg.

The June figure was the second strongest monthly reading this year after March’s 51.8 and marked the 11th straight month that the index, a closely watched measure of business sentiment for manufacturing activities, has remained above the 50 mark that separates expansion from contraction.

June’s better-than-expected PMI data came after a series of economic indicators for investment, consumption and industrial output for May showed China’s economic growth was slowing less than expected.

June sub-indexes showed upticks in export activity, new orders and production, while job creation edged down from the previous month.

The sub-indexes for production and new orders rose to 54.4 and 53.1, respectively, from 53.4 and 52.3 in the previous month. “It indicates stabilized sequential momentum, but may also be partially driven by a favorable working-day effect,” economists with the Chinese investment bank China International Capital Corp. wrote in a research note.

The economists explained that production indicators may have received a boost from an extra working day in June due to the shift in the date of the Dragon Boat Festival this year.

Economists believe that foreign demand was the key driver of June’s increase in manufacturing activity as domestic demand also picked up. The new export orders index rose to 52 in June from 50.7 in May, hitting a six-month high and indicating a continued recovery in external demand.

“Today’s data also hints at a pickup in the broader economy,” Julian Evans-Pritchard, China economist with Capital Economics, wrote in a research note.

The price components both increased for the first time since December, suggesting that downward pressure on producer prices may now be easing, Evans-Pritchard wrote.

The Producer Price Index, a measure of product prices at the factory gate and a leading indicator of consumer inflation, rose 5.5% year-on-year in May, down from a gain of 6.4% in April and the lowest reading so far this year, primarily due to a slide profits in the mining, chemical, and oil and natural gas industries in April.

China’s non-manufacturing PMI, which includes services and construction, ticked up to 54.9 in June from 54.5 in May, suggesting that the services sector continued to expand steadily, according to the NBS.

“The accelerating expansion in the services sector for two consecutive months continues to give more support to economic growth,” an NBS analyst said in a note accompanying the data release.

The PMI of the services industry rose to 53.8 in June on the back of solid growth in activities relating to a major e-commerce promotional event in mid-June, such as courier services and online shopping.

The construction PMI remained strong at 61.4 in June, up from 60.4 in May, on increased investment in infrastructure, according to the NBS.

However, the CEBM report warned that China’s economic growth may slow gradually, as it still is highly dependent on the driving forces from infrastructure and housing development.

“The dwindling stimulus effect from infrastructure construction and property development, as well as the tightening of fiscal and financial policies, mean that it is just a matter of time before economic growth will fall back from the heights seen at the beginning of the year,” the report said, adding that if the tightening continues, the slide may accelerate.