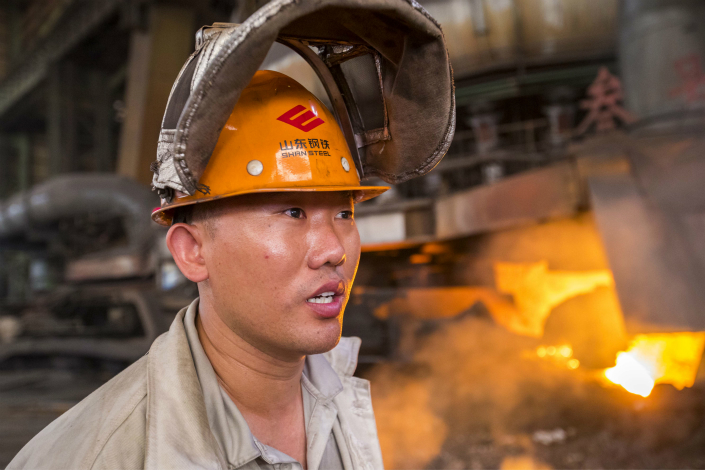 An operator waits for the last batch of melted iron in front of a 3,200-cubic-meter blast furnace on Thursday at Shandong Steel in Jinan, Shandong province. Photo: Visual China.

(Beijing) — Growth in China’s manufacturing activity recovered in June on the back of higher production and new orders, after slumping to its first contraction in almost a year in May, a Caixin survey showed on Monday.

The Caixin China General Manufacturing Purchasing Managers’ Index (PMI) — closely watched by investors as one of the first available indicators every month of the strength of the Chinese economy — rose to a three-month high of 50.4, up from 49.6 in May. A reading above 50 indicates expansion, while a number below 50 points to contraction.

Nevertheless, the index was barely above 50. Zhong Zhengsheng, director of macroeconomic analysis at CEBM Group, a subsidiary of Caixin Insight Group, cautioned that the manufacturing recovery may not last long. He pointed to declining inventories and waning confidence over the business outlook, which do not bode well for growth in the world’s second-largest economy.

“Based on the inventory trend and confidence around future output, the June reading was more like a temporary rebound, with an economic downtrend likely to be confirmed later,” he said.

The survey, sponsored by Caixin and compiled by international information and data analytics provider IHS Markit, showed that export and domestic demand remained subdued in June, leading companies to reduce inventories of inputs and finished goods — a signal that manufacturers are cautious about restocking due to an uncertain outlook. Some respondents said they slightly increased their purchasing activity on moderate pickups in increases of production and new orders.

Optimism about the outlook over the next 12 months also fell, with the future output subindex edging down to a six-month low in June, the survey showed.

Manufacturers continued to trim their payrolls, although at a slower rate, with the subindex of employment showing its best reading in three months. Nevertheless, it remains below the “50” line, where it’s been since late 2013.

After marginal contractions in May, the indexes of input and output prices both returned to expansion in June, mainly boosted by higher raw material prices. But the increases were much weaker than those seen at the start of the year, the survey showed, further evidence that the months-long surge in China’s producer-price index, the main gauge of factory-gate prices, has peaked.

The Caixin survey tallies with the increase in the official manufacturing PMI from the National Bureau of Statistics (NBS) released on Friday, which rose to 51.7 from 51.2 in May, also the highest reading in three months. But the official PMI showed a much more upbeat picture of exports, with the subindex rising to 52.0, the highest in more than five years.

The Caixin PMI and other economic indicators such as factory-gate prices, property investment and overall fixed-asset investment, suggest that China’s growth momentum has eased in the second quarter after a strong start to the year. Activity is moderating as policymakers stepped up efforts to rein in housing prices and intensified a regulatory crackdown on shadow banking to stop risky practices that could threaten the country’s financial stability.

The gross domestic product increased by 6.9% year-on-year in the January-to-March period, the second straight quarterly acceleration, and the government has set a growth target for 2017 of “around 6.5% or higher if possible in practice.” Economists are broadly in agreement that growth will trend down for the rest of the year as the tightening policies start to bite, although many expect restrictions will be relaxed if growth shows signs of weakening to such an extent that it threatens the government’s ability to achieve the target.