China to Rocket Its Shared Economy Into Space — the Final Frontier 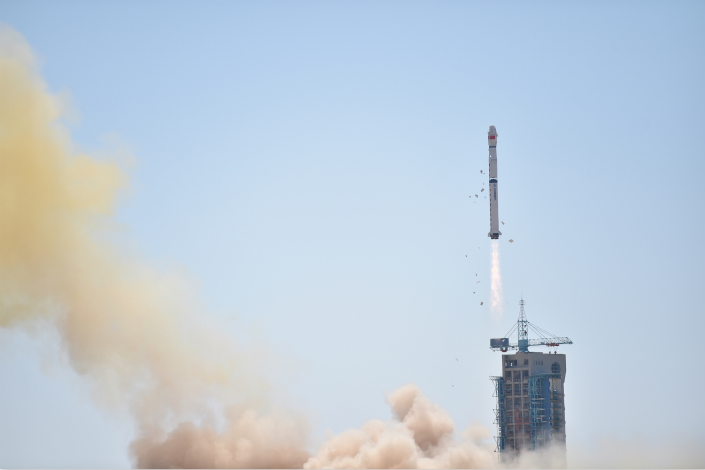 China has only about a dozen commercial space enterprises, but the nascent field has already attracted significant investor attention. Above, a Long March 4-B rocket carrying the Hard X-ray Modulation Telescope blasts off from the Jiuquan Satellite Launch Center on June 15. Photo: Visual China

China’s booming sharing economy is blasting off into space — with a telescope that satellite users can rent by the hour to look at distant stars and planets.

The satellite will allow space lovers to log onto a web portal to use professional astronomy equipment for 2,000 yuan ($295) to 3,000 yuan per hour. The project is the brainchild of Changsha-based company Tianyi Space Research Institute.

Tianyi is one of a handful of commercial space companies in China that’s breaking new ground in an industry that has been dominated by state agencies for decades.

But in 2015, China’s National Development and Reform Commission, the Ministry of Finance, and the Commission on Science, Technology, and Industry for National Defense jointly issued a 10-year plan for developing the commercial space industry.

Although there are only around a dozen commercial space enterprises in the country, the nascent field has already attracted significant investor attention. On May 18, rocket design startup One Space Technology announced that, months after completing its A-round of financing last year, it had secured an unspecified amount of funding from Chongqing Two Rivers Aviation Industry Investment Group.

Weeks earlier, Tianyi announced that it had raised close to 100 million yuan in its own A-round of financing.

But while some investors are optimistic, China has a long way to go before its commercial space industry catches up with the likes of U.S.-based SpaceX and OneWeb, industry insiders told Caixin.

Tianyi’s time-share telescope won’t be the first satellite launched into orbit by the 2-year-old startup.

Since its founding in May 2015, Tianyi has developed cube-shaped microsatellites weighing less than a kilogram (2.2 pounds) each and smaller than a fist. Founder Yang Feng chose to specialize in offering scientific-experiment and equipment-testing services. The company has already helped an engineering professor at the Chinese Academy of Sciences conduct microgravity experiments using one of their microsatellites.

One factor that attracted the engineering professor to Tianyi’s services was its relatively low prices. Unlike expensive military-grade satellites, one of Tianyi’s cube satellites costs only around 1 million yuan to construct and can be rented for tens of thousands of yuan, a low rate in the industry, Yang told Caixin.

“At the moment, the commercial satellite industry is most optimistic about demand from science labs,” said Li Ming, the executive director of Legend Star, a venture capital fund that invested in Tianyi. Conducting experiments in space using state agencies’ satellites requires a long wait, “but small commercial satellites are low-cost, and don’t have waiting lists, so they can fulfill many labs’ needs,” Li told Caixin.

One of Kechuang’s biggest clients and investors is Red Flag Software. In addition to designing software, Red Flag is also involved in collecting agricultural data, such as soil moisture and wind direction, from around the world.

Kechuang launched its first communications satellite, the KS-1Q, in November, and plans to launch a second in 2018.

Eventually, Ruo hopes the company will have a 70-strong network of satellites providing global coverage, at a cost of less than 70 million yuan.

There are still many technical hurdles to be overcome, Ruo told Caixin. Microsatellites are cheaper to build but less reliable, and 20% to 30% fail to function normally after entering orbit, Ruo told Caixin.

Additionally, commercial communications satellite operators have to go through a long process of applying with China’s Ministry of State Security and the UN’s International Telecommunications Union for a designated signal frequency.

Regardless of business strategy, China’s satellite companies are all dependent on rocket builders to launch their products into space.

“In the past few years, domestic rocket-launch services have reached their saturation point, and the demand from government and commercial clients has caused the three main launch sites to be in a state of constant frenetic activity,” Liu Yufei, deputy director at privately owned, Beijing-based Hangtian Jia Gongcheng Technology Research Institute, told Caixin.

One Space, founded in 2015, is one of three private rocket startups hoping to change this. The Beijing-based company is developing its first rocket, Xinshi 1, which it hopes to launch in 2018.

A poorly developed supply chain means rocket designers frequently have to start over if a deal with a supplier falls through, especially since China’s space industry is still dominated by state-owned companies. “Some state-owned companies sign a contract, but if the leader vetoes the deal, that’s it,” Shu said.

“This is One Space’s third year in existence, but we still have some time to go before we achieve the launch of our first rocket,” founder Shu Chang said.

Another issue that rocket companies face is military control of launch sites, Ding Runqiang, vice president of the Chinese Academy of Sciences’ venture capital fund Cash Capital, told Caixin. “One rocket can carry 100 satellites into space, but how many rockets can you launch each year?” Ding asked.

Additionally, private rocket companies face stiff competition from the two state-owned launch service providers. “Launch costs make up only around 10% of overall costs for satellite companies,” Ruo told Caixin. “The most important consideration is safety,” not price, so clients gravitate toward well-tested military rockets rather than newcomers, Ruo said.

Still, some are optimistic about the future of commercial rocket companies. In May, ZerOne announced that it had received close to 300 million yuan in funding for a Chongqing production plant.