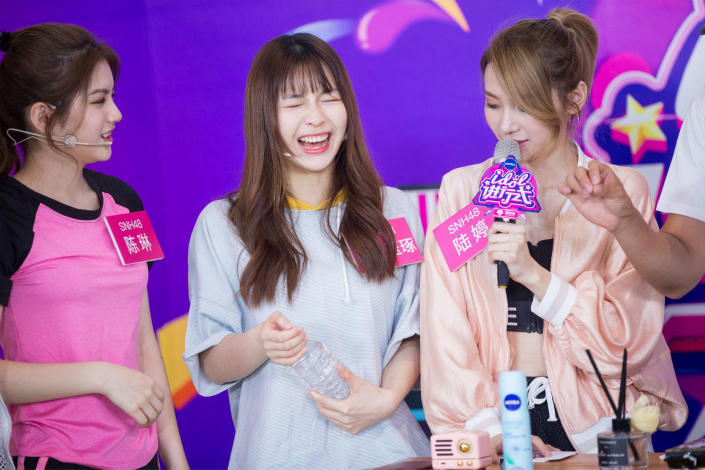 Looking to get out in front of regulators, online broadcasters adopt code banning scenes featuring homosexuality, torture and extravagance from web videos. Above, 7Senses, a subunit of girl idol group SHN48, films a reality show on May 12 about online shopping and fashion in Hangzhou, Zhejiang province. Photo: IC

(Beijing) — China’s online broadcasters have renounced witchcraft — or at least its depiction in the programs they host on their sites.

Along with homosexuality, torture and extravagance, witchcraft is one of the many topics that an association of online broadcasters has volunteered to censor from online videos as the industry braces for coming government regulation.

The Netcasting Services Association, a group that consists of the nation’s biggest players in online video, including Tencent Holdings Ltd., iQiyi and Youku, has created a self-regulatory code for determining “inappropriate” content.

The association also includes state-controlled media corporations such as Xinhua Net and the online division of People’s Daily.

Under the code, the association’s members have agreed to delete more than 50 different types of inappropriate content from web videos before they can be uploaded.

Web video comprises all kinds of online programming, including documentaries, animation, films and the mega-popular genre of reality-TV shows.

The code, called the “General Rules on Web Audio and Video Censorship,” sheds light on the broad spectrum of topics that regulators find unacceptable.

Taboos include negative depictions of the police, the army, “revolutionary leaders” or “historical heroes.” Under the code, association members have vowed to cut scenes featuring hysteria, torture, revenge and extensive portrayals of religious tenets or ceremonies.

They must also edit out depictions of reincarnation, possessed souls and witchcraft, as well as tactics that police use to solve crimes — which authorities fear will help criminals commit crimes.

According to the guidelines, displays of underage sexual acts, including those of adolescent cartoon characters, are forbidden.

Teams of at least three censors will comb through every video from title to credits for content deemed sensitive or inappropriate. They are not allowed to speed up or skip through parts of the video. The government trains and certifies these personnel, who are then employed by the video-hosting platforms.

China’s film and TV censors have largely functioned according to little-known rules or fuzzy guidelines, such as ones that prohibits content that “endangers sovereign and territorial integrity” or is considered pornographic, vulgar, violent or superstitious.

The rules suggest that the industry is willing to regulate itself rather than wait for the government to act, especially now that online web series have grown so popular. These series have tended to feature more fantasy and crime themes and have generally been subject to slacker internal censorship.

Authorities continue to deliberate on comprehensive regulations for online audio and video content providers. The draft, which will amend regulations first adopted in 2004, was put forward for public comment in June 2015, but only included a rough outline of the restricted content.