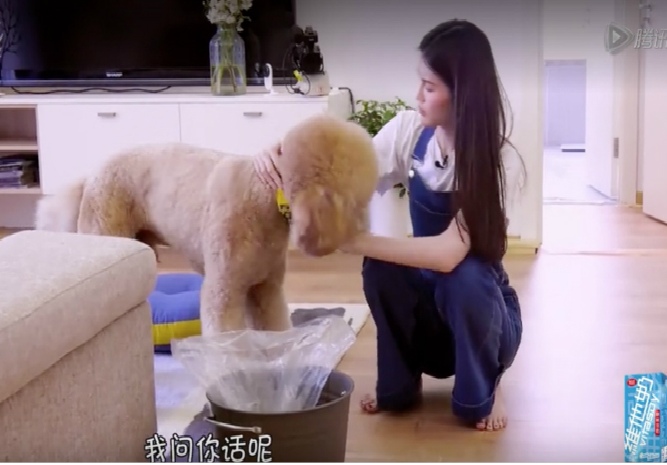 A screenshot of the first episode of the second season of "Stand By Me," with an advertisement for Vitasoy appearing in the bottom-right corner. At the time of the screenshot, the episode had been viewed 120 million times.

Would a Victoria’s Secret supermodel take good care of your pet while you’re away from home for a few days? This is the tough question being tackled in "Stand by Me," China’s hottest online variety show that has attracted hundreds of millions of yuan in investment.

After years of being accused of ripping off foreign television hits, Chinese variety show producers have started scripting their own templates to feed the hunger for homegrown content.

But attempts by advertisers to control the storyline and celebrities who demand a lion’s share of the production budget threaten to snub out this creative spark.

The variety genre that includes reality TV shows, quizzes, debates and celebrity gossip has exploded on small screens across the country over the past decade. There were just such 10 shows in 2005, but the number jumped to more than 250 last year, according to Chinese media outlet Film and TV Observer. After the government allowed state-backed satellite TV channels to outsource production to private studios at the turn of the century, Chinese producers have tried to replicate the success of international franchises such as "The Voice" and "Running Man" at home.

“Within five years (starting in 2005), Chinese buyers had purchased nearly all the super variety models from Europe, U.S., Japan, South Korea and some other countries,” said Cao. His company helped kick start this global shopping spree with the acquisition of the successful singing show, "The Voice," that had franchises in more than 60 countries.

But locally produced versions of Western and Korean franchises that combine the exotic with the familiarity of local aesthetics started losing their sheen starting in 2015. "Running Man," a popular South Korean show that asks celebrities to solve puzzles as they progress along an obstacle course, saw its viewer ratings drop by 40% from 2014 to 2016. That was according to ratings on Douban, a website similar to Rotten Tomatoes that relies on user reviews to rank films, books and TV shows. Viewer ratings for "Sing! China," a knock-off of "The Voice of China" series, slid from 4.4 in 2015 to 2.8 in 2016.

The fall of "Sing! China," produced by Cao, rattled advertisers and investors for another reason. Cao and his crew had broken ranks with the foreign brand owner of "The Voice" series after a protracted legal battle amid sky-rocketing franchising fees. The original "The Voice of China" series, produced in collaboration of Dutch company Talpa Global, had attracted more than 120 million TV viewers in China, while another 400 million streamed it online. But the spectacular crash of the copycat show after the Chinese producers went solo exposed the risks of trying to adapt Western models and pushed many investors to look for a winning formula closer to home. This was when they noticed a handful of long-established Chinese variety shows such as "Day Day Up," which promotes traditional Chinese art and handcrafting, and "Happy Camp" that had managed to sustain high viewer ratings for nearly a decade.

What started off as a quite trickle, quickly gathered momentum, pushing domestically produced shows into the limelight.

This wave of interest also spawned hits that delve deeper into Chinese culture, such as "The Chinese Poetry Conference." The 10-episode series made stars of poetry lovers who were well-versed in ancient Chinese classics and attracted nearly 1.2 billion views despite the absence of any celebrities.

Meanwhile, a government rule in mid-2016 that stopped satellite TV stations from broadcasting more than one foreign-format show each year has cleared the airwaves for local creations.

When Zhu Hukuai, the producer of "Stand by Me," was looking for the next big idea for a variety show, he didn’t start by brainstorming with a group of script writers. Instead, his team did a market survey to see how Chinese consumers liked to spend money. After scanning through several sectors including fashion and cosmetics, they zeroed in on the country’s pet industry.

Pet ownership in China was growing at a whopping 20% each year, with the rise of young households with dual incomes, but no children, the team found. And they were ready to splurge money on dog spas that offered a 480 yuan mud bath for their terriers.

The production team went to the drawing board and designed a variety show that not just entertains, but also helps loosen the purse strings of pet owners. The show focuses on how celebrities care for pets left under their charge. Many of the animals had their own pet castles, branded clothes and accessories. Although the show has only been aired for two weeks, it has already fueled a wave of demand. Local pet owners were asking Chinese students or homemakers in the U.S. to buy dog leashes or Simpsons T-shirts for their little wards and courier them to China on online shopping forums.

“Data from first two episodes of "Stand by Me" told us that about 70% of the viewers were female young adults,” said Zhu, CEO of Xinchi Media.

Other Chinese producers were also scripting shows to create hype about an industry or a sponsor’s brands. This included the recent runaway hit focused on China’s emerging home-deco market. And advertisers, weary of 30-second commercials or subtle product placements, were lapping up the idea.

"Stand by Me" has inked advertising deals with Myfoodie, a pet food company, and Vitasoy, which makes soy milk and green tea beverages. And during the first 10 minutes of the first episode of "Stand by Me," beverages from Vitasoy appear 25 times.

Variety shows have also spawned successful mobile games and clothing brands. For example, when Chinese heartthrob Zheng Kai accidentally passed gas while on the set of "Running Man" in 2014, it became a trending topic on social media. Within a week, the star launched his own clothing line and used a mushroom cloud as its brand to make fun of himself. The clothes, specially the jeans, sold like hot cakes.

The pet show, "Stand By Me," has devoted a sizable chunk of the program showing celebrities walking 10,000 steps each day with their pets wearing Vitasoy’s pedometer.

In addition to pressure from advertisers to integrate their brands into the story, producers were also crushed by celebrities who demand a lion’s share of the production budget.

Zhu says 60% of the production cost for "Stand by Me" went to the celebrity pet keepers that included Victoria’s Secret super model He Sui.

“We were able to cut back on the celebrity paychecks after switching from a satellite TV show to an online-only show,” he said.

But sky-high celebrity pay remains a hotly debated topic on Chinese social media. According to data from Tencent, which has investments in several large video-streaming platforms, rock singer Wang Feng made 12 million yuan for appearing as a judge in one season of "The Voice of China" in 2014.

Producers also have had to step gingerly to avoid topics deemed taboo by authorities such as homosexuality and time travel. Last year, China's media regulator also banned reality television shows from featuring the children of celebrities, spelling the end for one of the country's most popular prime-time programs that showed celebrity dads traveling with their children.

Despite these challenges, Chinese variety show producers say they are continuing to explore new possibilities.

Cao from Star Media says his team is experimenting with introducing virtual reality elements into variety shows that allow viewers to feel like they are on the set, or even augmented reality, similar to what was used in Pokémon games. But he declined to offer details as the projects are still under development.

After years of having their eyeballs abused by copycat shows, Chinese viewers were now yearning for something different, said Zhu. “Only good content is what matters ultimately,” he said.