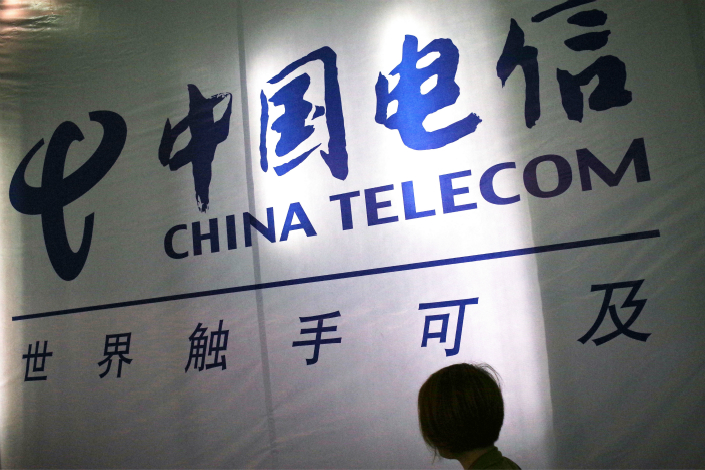 A China Telecom stand at an exhibition in Jinan. A former vice president of the company is being probed for corruption after allegedly accepting bribes from two firms seeking to do business with the wireless carrier. Photo: IC

A former vice president of China Telecom is being probed for corruption, after allegedly accepting bribes from two companies seeking to do business with the smallest of the nation’s three wireless carriers, according to a media report.

The investigation is the latest in a string against top officials under President Xi Jinping’s 4-year-old campaign against corruption that targets high-ranking individuals in both government and major state-run enterprises.

After retiring for five years, Leng Rongquan was placed under investigation for “serious breaches of discipline,” a term normally used to designate corruption, according to a report in the Law Evening News. Two other companies involved in the case were also being investigated, the report said.

A spokeswoman for China Telecom Corp. Ltd., the company’s Hong Kong-listed arm, could not immediately confirm the report.

According to the report, Leng helped a Beijing media company win contracts worth more than 20 million yuan ($2.9 million) from one China Telecom unit in Qinghai province and another in the southern city of Shenzhen. He also helped a Shanghai company win similar contracts worth more than 12 million yuan from China Telecom’s subsidiary in eastern China’s Jiangsu province, the report said.

Word of the investigation comes amid a broader wave of probes into executives at large state-run firms, including other telecoms operators. In one of the most recent cases, former China Telecom Chairman Chang Xiaobing was sentenced to six years in prison and fined 500,000 yuan in May after being found guilty of corruption charges.

In that case, a court in the northern Chinese city of Baoding found that Chang had taken advantage of his position at previous state-run employers to accept money and other valuables worth more than 3.76 million yuan. He was given the relatively lenient sentence after pleading guilty, returning his illegal gains and showing remorse for his actions.