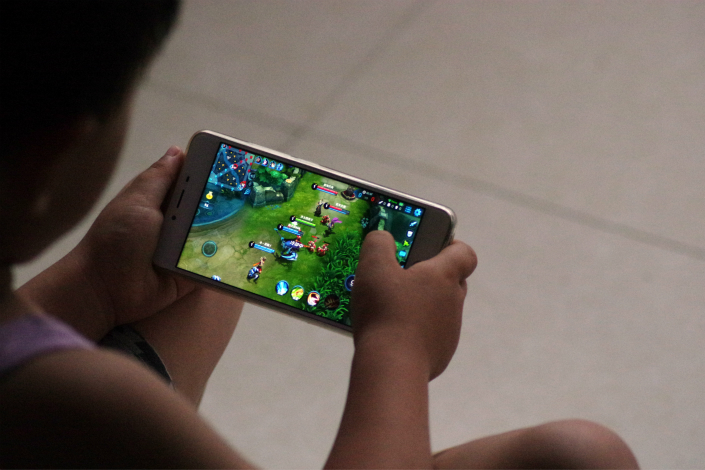 Tencent Holdings Ltd.’s shares skidded on Tuesday after the company said it would limit youngsters' playing time for the online game "Honour of Kings." Above, a child plays "Honour of Kings" on July 2. Photo: IC

(Beijing) — Shares of internet giant Tencent tumbled on Tuesday as the creator of a mobile game that has mesmerized teens and young adults nationwide responded to criticism by limiting play time for younger players.

Tencent Holdings Ltd.’s shares slid as much as 5% during the daily trading session in Hong Kong before closing down 4.1%, wiping out more than $4 billion in market value.

The game at the center of the storm, “Honour of Kings,” has become one of the highest-grossing titles of all time, grouping people together in teams of five in an emerging format of online team games that take battle and strategy to new levels. But that same fever has created a new wave of gaming addiction among some of the most ardent players.

Responding to criticism over the matter, Tencent announced on Sunday it will limit children 12 years old and younger to an hour each day, with access barred after 9 p.m. Parents will also get more control over their children’s activities, including the ability to terminate gaming sessions from a separate device. Players 13 to 17 years old will be limited to two hours per day.

“Safeguarding other peoples’ children from addiction is in essence defending the game itself,” said Li Min, the core developer behind the game, in an open letter on Sunday.

The policy, which took effect on Tuesday, applies to a game whose name rhymes with the Chinese word for “pesticide,” and has taken on that moniker in a nod to its toxic nature. Evidence of that addictive quality has shown up in a recent flood of media reports highlighting the game’s intoxicating effect on children.

According to one of those, a sixth-grader in the coastal city of Hangzhou jumped from the fourth story of an apartment building two weeks ago after his father demanded he stop playing the game as final exams were approaching. Upon regaining consciousness in the hospital two days later, his first reaction was to reclaim his phone and continue his cyber combats.

The People’s Daily, the official newspaper of the Communist Party, ran two editorials in its Tuesday edition criticizing the game, including one headlined “‘Honour of Kings’: Entertainment for the Masses or a ‘Menace’ to Human Life?”

“As a game, ‘Honour of Kings’ is a success, but it has been unleashing endless negative energy on society,” the editorial said. “Unfortunately, in the process of making money and harming people and students, it is imperative to exercise caution.”

In less than two years since its launch, “Honour of Kings” had claimed a record-setting 200 million players as of April, roughly equivalent to 1 gamer among every 7 smartphone users in China.

The success owes in part to a combination of fast-paced gaming with social networking, Tencent’s two biggest strengths. Players are repeatedly drawn to the game as a setting to get together with friends on WeChat and QQ, two of China’s most ubiquitous social networking platforms, also run by Tencent.

The frenzy has provided a bonanza for Tencent, which earned 13 billion yuan ($1.92 billion) in revenue from smartphone games alone in its most recent reporting quarter, accounting for more than a third of its total revenue.

The latest action to protect youth, while getting praise from concerned parents, isn’t expected to have a huge impact on the game’s business. That’s because students under 19 make up just 3% of total users, and that group pays slightly less than adults, according to data tracking firm Talking Data. More than two-thirds of players are over 26.

In response to the broader problem of gaming addiction, Beijing is considering draft regulations that would ban adolescents from playing between midnight to 8 a.m. One critical element to making any system work is real name registration, which is required but often slackly enforced. But in its latest move to tackle the problem, Tencent also said it will step up enforcement of such registration.