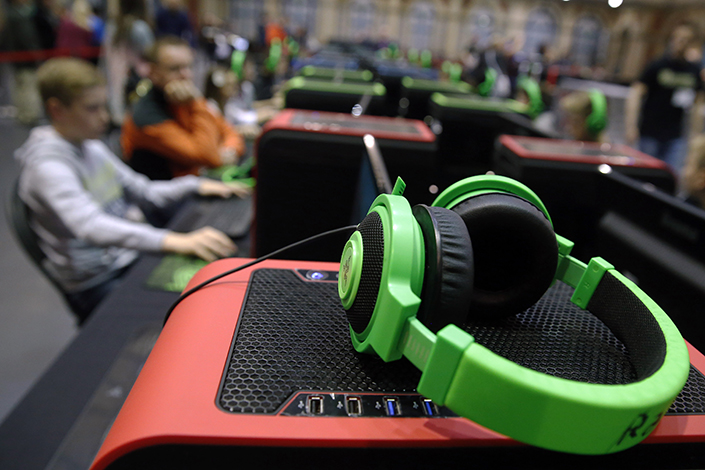 San Francisco-based Razer Inc., a maker of gaming accessories and software, has applied for an initial public offering in Hong Kong. Above, Razer headphones sit on a gaming unit at the "Legends of Gaming Live" event in London in September 2015. Photo: Visual China

The San Francisco-based company has recently applied for an initial public offering (IPO) in Hong Kong, according to the company’s filing with the Hong Kong stock exchange. It did not say how much the IPO will seek and when it will take place, but added that the fresh cash will be used to fund expansion of product portfolio and potential acquisition.

Razer shelved its listing plan in the U.S. in the second quarter of 2015 citing unfavorable market conditions, the filing said.

In the stock-exchange filing, Razer said it plans to launch its first mobile device in late 2017 or early 2018. “We plan to continue to introduce new products and services to further diversify our revenue streams, including those with which we have little or no prior developing or operating experience,” it said. Part of the IPO proceeds will be used to expand its virtual credit services zGold, it added.

A report released in April by Newzoo, a research firm that tracks the gaming industry, said mobile gaming will contribute more than half of the revenues of the entire global gaming market by 2020. This segment is expected to grow by 19% to $46.1 billion in 2017 from last year, or 42% of the entire gaming market, the report added.

Despite growing revenues, Razer has been reporting losses since 2015, the filing showed. The company said it was due to increased costs in product development and acquisitions. It reported a loss of $59.6 million in 2016, worse than a loss of $20.4 million in 2015. In 2014, the company posted a profit of $203 million.

Half of its revenue was generated from the Americas, 27% from Europe and the Middle East and Africa, while 12.7% from China, the filing said. Approximately 87.1% of Razer’s revenue in 2014 came from the sale of gaming accessories. The proportion dropped to 76.2% in 2016.

The filing said the company had conducted four rounds of funding. Li Ka-shing and his companies have accumulated 1.29% stake of Razer, while Temasek 1.45%. Li’s telecom unit, 3 Group, is also a mobile network partner with Razer.