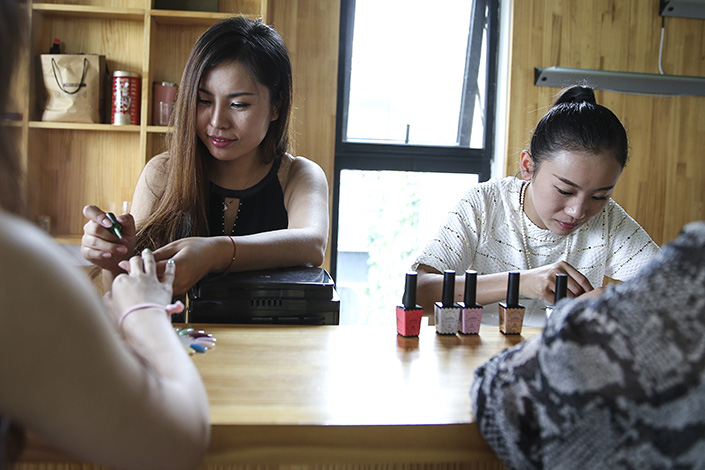 The Caixin China General Services Business Activity Index fell to 51.6 in June from a four-month high of 52.8 in May. Above, manicurists do customers' nails at a home in Beijing in July 2014. Photo: Visual China

(Beijing) — China’s services sector expanded at a slower pace in June, as growth in new business and employment softened, damping the outlook for the world’s second-largest economy after a report earlier this week showed a pickup in manufacturing activity.

The Caixin China General Services Business Activity Index fell to 51.6 in June from a four-month high of 52.8 in May. It was the second-lowest reading in 13 months, although still well above the 50 line that divides expansion from contraction.

The decline dragged the Caixin China Composite Output Index, which covers manufacturing and services companies, down to 51.1 in June from 51.5 in May, in spite of a rebound in the Caixin Manufacturing Purchasing Managers Index to a three-month high of 50.4.

Zhong Zhengsheng, director of macroeconomic analysis at CEBM Group, a subsidiary of Caixin Insight Group, said that the manufacturing recovery is unsustainable and is insufficient to put the brakes on a slowdown in overall economic growth.

“Even though the impact of slowing expansion in China’s services sector was cushioned by a slight rebound in manufacturing activity, the downward trend in the economy remains entrenched,” he said in a statement to release the services index.

China’s economic growth accelerated to 6.9% year-on-year in the January-through-March period, the second straight quarterly pickup. But official data released so far for the second quarter have pointed to a slowdown in momentum as policymakers stepped up efforts to rein in housing prices and crack down on shadow banking to stop risky practices that could threaten the country’s financial stability.

The services sector — which includes finance, real estate and marketing, transportation, and retailing — has become an increasingly important part of the Chinese economy, reflecting a shift away from traditional heavy-industry manufacturing and exports.

Also known as the tertiary sector, it accounted for 51.6% of the country’s economic output in 2016, up from 50.2% in 2015, and contributed to nearly 60% of the growth in domestic gross product, according to the National Bureau of Statistics (NBS).

The Caixin survey of services companies showed that new orders last month increased at their weakest pace in just over a year, a slowdown attributed to clients retrenching on spending due to subdued market conditions.

The services sector is more labor-intensive than manufacturing, and policymakers are counting on it to create more jobs. However, a subindex of employment in the services survey showed that staff hiring last month expanded at its slowest pace in 10 months. The moderation, combined with a contraction in the employment gauge of the manufacturing PMI, pushed overall hiring lower for the third straight month.

The increase in output prices charged by services companies was the softest in four months, with some companies noting that greater market competition had weighed on their ability to raise prices.

Although activity and new orders expanded at slower rates, services companies remained optimistic regarding the one-year business outlook, and the confidence subindex edged up to a five-month high, buoyed by forecasts of improving demand and new projects.

The official nonmanufacturing Purchasing Managers Index, published by the NBS on June 30, which covers more companies than the Caixin survey, rose to 54.9 in June from 54.5 the previous month on strong growth in courier services, air transportation, insurance and construction. The Caixin poll does not include the construction sector.