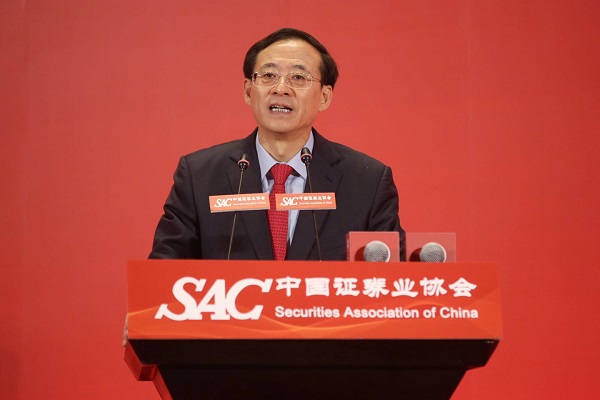 The China Securities Regulatory Commission (CSRC) in June approved 24 listed companies' plans to merge, acquire or restructure their respective businesses. Liu Shiyu (above), who became the head of CSRC in March, has been prioritizing reforms to improve the quality of listed companies and their information disclosure. Photo: China Securities Regulatory Commission

(Beijing) — Mergers of Chinese-listed companies picked up in June, signaling the securities regulator may allow more publicly traded firms to improve their quality through consolidation, at least in the near term, industry watchers say.

Last month, the China Securities Regulatory Commission (CSRC) gave the green light to 24 listed companies to merge, acquire or restructure their businesses. It was the highest monthly total since the beginning of this year.

Most of the approved plans were reverse mergers or so-called backdoor listings, in which unlisted assets are injected into another publicly listed shell company.

Industry watchers believe the increase of approvals is in line with the CSRC’s latest policy direction.

Liu Shiyu, who became the head of CSRC in March, has been prioritizing reforms to improve the quality of listed companies and their information disclosure.

“Brokerages cannot just focus on businesses like underwriting and sponsoring. They should also put more efforts in facilitating corporate M&As and restructuring to rejuvenate the market,” Liu said at a meeting at the Securities Association of China on June 17.

He also said brokerages should offer more professional services to support the reform of state-owned enterprises, indebted “zombie” companies, and those burdened with overcapacity.

Analysts expect the deal flow may pick up even more in near future, although it remains to be seen how long this streak will last.

“After all, the capital market is policy-driven,” an investment banker told Caixin.

In the middle of 2016, the CSRC curbed speculative fundraising taking place through the acquisition of shell companies, and rejected backdoor-listing plans involving firms whose controlling shareholders have a recent criminal record.

Faster IPO approval, another route of fund-raising in the capital market, also reduced demand for backdoor listings earlier this year.