China Tightens Its Commitment to Use of Natural Gas 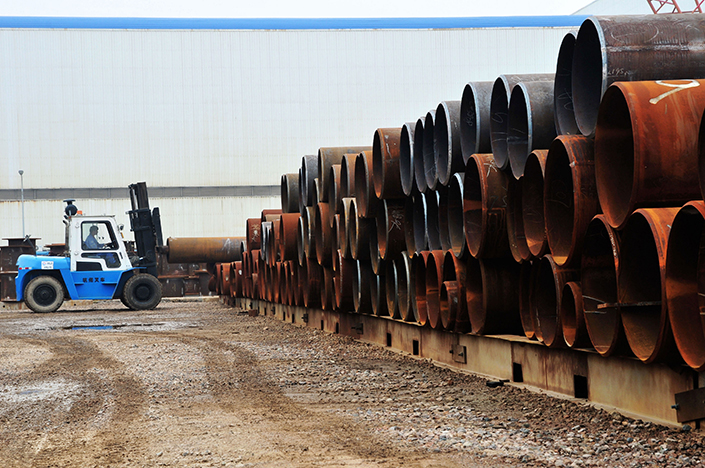 China is aiming for natural gas to account for around 10% of the country’s total energy consumption by 2020, compared with a target range of 8.3% to 10% set in December. Above, a forklift moves natural-gas pipes in Qingdao, Shandong province, on July 1, 2016. Photo: IC

(Beijing) — China has narrowed its target for how much of the country’s total energy consumption will be made up by natural gas.

China is aiming for natural gas to account for around 10% of the country’s total energy consumption by 2020, according to a directive jointly published by 13 governmental agencies.

The figure is at the high end of a target of between 8.3% and 10% for natural gas set by China’s top economic-planning body in December. In 2015, natural gas made up 5.9% of China’s total energy pie.

The decision reflects Beijing’s efforts to reduce the use of coal — which still makes up more than 60% of energy sources. Coal is a top contributor to greenhouse gases and air pollution — both of which Beijing has vowed to curb. Carbon emission from the burning of natural gas is 59% of that from coal and 72% of that from oil.

The directive is expected to send the country’s natural gas use onto a “high-speed development trajectory from 2017 for the medium to long term,” said Guo Jiaofeng, a senior researcher with the Institute for Energy and Environmental Research of the Development Research Center of the State Council, China’s cabinet.

The document reiterated a goal to boost natural gas use to around 15% by 2030.

“The large-scale and highly efficient use of natural gas in fuel supplies for cities, industries, thermal power generation and transportation will be facilitated at a faster speed,” the directive released this week said.

The move is to “effectively tackle air pollution and deal with climate change in an active manner,” it added.

To achieve the 10% target, consumption will have to increase by double digits annually on average over the four years starting from 2017 to reach 330 billion cubic meters by 2020, Guo said, much faster than rates seen in recent years.

China’s natural gas consumption soared at an average annual rate of 16.1% from 2000 to 2013. But the increase has slowed to single digits since 2014, as demand plummeted due to weakening domestic economic expansion and the fuel’s stubbornly high price, Tao Liping, an economist with the State Information Center, a government think tank, wrote in a report in January.

Despite lukewarm demand, authorities are promoting natural gas as a way to curb air pollution.

Smog routinely blankets large swathes of the country in winter, especially in the north where many steel plants are located. It has sparked growing public anger because the amount of PM2.5 — dangerous, fine particles linked to lung damage and respiratory illnesses –— it spews often exceeds the maximum safety level advised by the World Health Organization, by multiple or even dozens of times.

The promise Beijing has made to the world to fight climate change is another factor behind its push for clean energy.

President Xi Jinping in 2014, after meeting then-U.S. President Barack Obama in Beijing, pledged that China’s carbon emissions will peak “around 2030,” with nonfossil fuel making a fifth of energy sources by then.

Clean energy, including hydraulic power and natural gas, accounted for 19.7% of China’s total energy consumption last year, up from 18% in 2015. Coal’s share fell by 2 percentage points to 62%, NBS figures showed.

While boosting domestic output of natural gas, the country has also been increasing imports of the fuel.

Of its mega deals struck in recent years, China National Petroleum Corp. (CNPC), the country’s top oil producer, in 2014 signed a 30-year supply contract worth $400 billion under which Russia’s Gazprom will provide 5 billion to 30 billion cubic meters of natural gas to China annually for the first five years of the agreement.

Starting from the sixth year, Russia will deliver 38 billion cubic meters of gas. A Sino-Russian natural gas pipeline will begin deliveries in December 2019, according to the latest agreement.