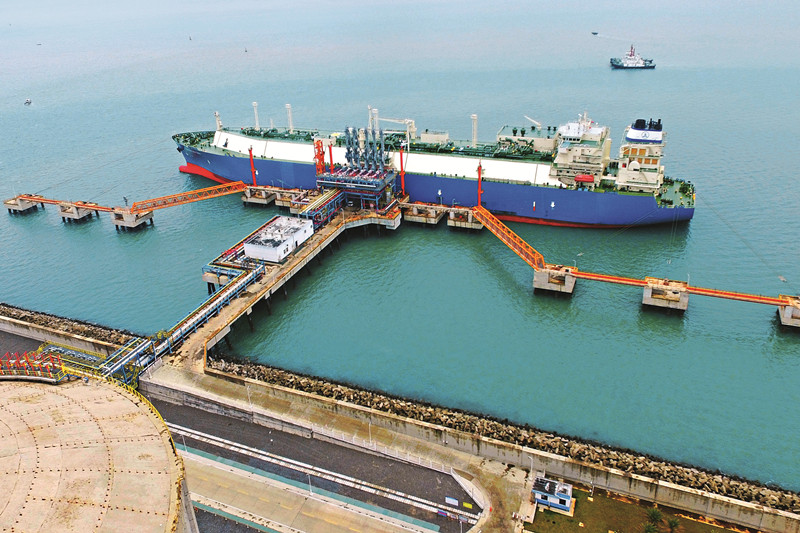 (Beijing) -- Rising demand for cleaner energy is pushing China toward a larger role for natural gas.

But the natural-gas sector largely remains in the firm grip of a state oligopoly that's been accused of slowing the gas market's progress -- an issue that the government is now keen to address.

Natural-gas consumption has grown by leaps and bounds in recent decades. Chinese households and businesses consumed about 204 billion cubic meters last year compared to 29 billion cubic meters in 2002, according to an industry report from the state-owned China National Petroleum Corp., also known as PetroChina.

Domestic production and imported natural-gas supplies, minus gas exports, last year rose to seven times the 2002 level, according to the report.

The Big Three, whose main business is oil, comprise a formidable oligopoly. PetroChina alone controls about 70% of all natural-gas production and sales in China. Sinopec and CNOOC handle 16% and 10%, respectively.

Since 2005, PetroChina has operated the West-East Gas Pipelines network linking the gas fields of western China's Xinjiang region as well as Qinghai and Sichuan provinces to population and industrial centers in the nation's eastern and central provinces. China has about 13,000 kilometers of natural gas pipelines.

But experts say the west-east network, which cost tens of billions of dollars to build, has yet to reach full potential as a means for evenly distributing domestic gas supplies.

Industry-heavy eastern provinces such as Guangdong and Jiangsu have benefited from the pipelines and are now among the nation's largest natural gas consumers.

But currently most of the natural gas extracted from Xinjiang and Sichuan wells is consumed in those areas, according to a 2016 report by China’s Urban Natural Gas Association. As a result, wholesale prices for natural gas in many eastern and central regions are higher than household consumer prices, thus encouraging businesses and factories to opt for more carbon-intensive and less expensive energy forms.

Neither have the pipelines and western fields come close to satisfying China's almost boundless appetite for natural gas. The nation burned every bit of the 137.8 billion cubic meters pumped from domestic wells in 2016, as well as the billions imported from other countries.

China is now the world’s fourth-largest natural gas importer, according to the Global Energy Statistical Yearbook. Cross-border pipelines, with a combined capacity of 67 billion cubic meters, transport gas from central Asia and Myanmar.

China also imports liquefied natural gas from outside Asia and is building eight additional LNG carriers to complement the existing 12 receiving terminals. The combined annual capacity for the completed terminals is about 65.5 billion cubic meters.

Central government officials, well aware that China's is now the world’s largest emitter of greenhouse gases, have spent years carving out elements of a market-oriented strategy for the natural gas sector. Gas-price reform has been among their priorities.

The timing of the government's latest reform efforts certainly seems right: Today's strong demand is set against the backdrop of a global supply glut that's made natural gas more affordable than ever.

Natural-gas suppliers in Australia and the United States, for example, have bumped up production by nearly 40% each over the past seven years and are now racing to export their surplus. Neither country has seen domestic demand rise by more than 10% during the period.

“Natural gas is the most realistic, clean-fuel alternative for China, and an important fixture in an effective and low-carbon energy structure,” according to a directive for the natural gas sector included in the government's 13th Five-Year Plan, which covers the period through 2020.

Since price reform efforts are closely tied to the costs of natural gas distribution, exploration and pipeline operations, the government in recent months has introduced a string of new policies designed to boost the efficiency of domestic gas distribution and centered on the principle of “controlling pipelines but not prices.”

The policies essentially clear the way for the Big Three to raise prices within a range above the government's minimum price levels.

Under one policy, the government's chief energy price-control agency, the National Development and Reform Commission (NDRC), said PetroChina can price in “reasonable profit” tied to pipeline operations. NDRC price guidelines released in October set that profit margin at 8% of operational costs for pipelines operating at 75% or higher capacity levels.

In a separate decision, the NDRC in November launched a pilot price reform program in coastal Fujian province requiring that pipeline-delivered gas charges compete favorably with prices for gas imported via regional LNG terminals. As a result, provincial officials said they expected the province's natural gas consumers to save about 128 million yuan a year.

For example, plans to reform oil and gas sector pricing on a national scale have been discussed since 2015 but have yet to materialize.

As a result, the state-run energy oligopoly continues to retain a dominant influence over the oil and gas sector. The government has appointed none of its agencies to regulate and supervise these companies.

Also standing in the way are uncertainties over whether PetroChina and Sinopec can or even should spin off their pipeline operations, or create new pipeline subsidiaries, with the goal of fostering more upstream competition, said Shi Xunpeng, a senior researcher at the National University of Singapore's Energy Studies Institute.

Government and industry officials have yet to reach consensus on the future of the pipeline operations. Shi said the choice is “essentially all about which option investors prefer.”

As for injecting competition into natural-gas exploration operations in China, Shi thinks the nation's best bet lies with inviting foreign companies to join the domestic market rather than seeking new investment avenues through the domestic private sector.

Some experts say creating a new supervisory agency and encouraging a more competitive business environment would help streamline the market, giving more homes and factories access to clean-burning natural gas. A version of that basic plan was recently proposed in a report written by Deng Yusong, a director at the State Council’s Development Research Center.

Other experts such as Wang Zhen of the CNPC Policy Research Institute are calling for boosting natural gas infrastructure construction and promoting competition on the downstream end of the business.

“Consumption is being restricted by pipeline capacities, and insufficient storage tank (supplies) are creating a huge gap between peak times for natural-gas consumption in the winter and slow periods in the summer, when there are not enough facilities to store excess gas,” Wang explained.

Opening the sector to more distributors could cut consumer costs in provinces such as Zhejiang, Wang said, where distribution accounts for as much as 30% of the total natural-gas price.

“Even after gas travels by pipeline and arrives at a destination, there are still many additional steps it must go through before reaching the end user,” he said.

Some experts argue lowering prices and boosting competition could lead to chaos if the industry suddenly embraces a new wave of private energy companies. China could see conditions in the natural-gas industry deteriorate into the kind of chaos that gripped the coal-mining sector of the 1990s, when more competition was blamed for dangerous work conditions, mine accidents and under-the-table deals among private players.

Shi acknowledges that balancing fair opportunities for private companies and the needs of state-owned energy giants may be impossible.

“But something needs to sketched out now," he said. "This is the moment when each decision made will have an impact... on the future.”