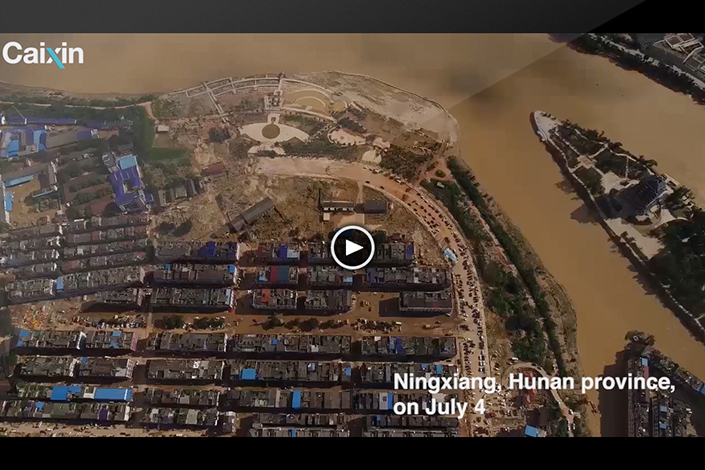 (Ningxiang county, Hunan province) — When Chen Haipeng, who runs a home-appliance store in rural Ningxiang county, heard that authorities had decided to discharge water from a nearby reservoir to avoid a breach, he scrambled to pack his cooking pots and other wears.

“I received the notice sometime between 4 and 5 p.m. on July 1, and the floodwaters reached the store five minutes later,” Chen said.

“We were knee-deep in water in 10 minutes, and it didn’t take very long for the water level to reach the second floor of my store, which is about 2.8 meters (9.2 feet) above the ground,” he said.

“I’ve spent 10 years building the business, and it only took two hours to destroy almost everything I had.”

About 1,700 shops at the Shahe Market, where Chen ran his shop, were flooded on July 1 as floodwaters rose to 4 meters, according to the Xiaoxiang Morning Post, a local government-backed newspaper.

Shop owners said they have lost millions of yuan worth of goods when water from the nearby Huangcai Reservoir gutted their shops on July 1 because the government warning didn’t reach them on time.

The command center overseeing flood and drought control in Hunan province’s capital, Changsha, decided to discharge water from the reservoir at 7 a.m. on July 1 to avoid a breach that could have flooded nearby Changsha, according to the Sanxiang Metropolis News, another government-backed newspaper. Authorities had issued an early warning to residents living in towns downstream, the newspaper said.

The decision to discharge reservoir water came after heavy rains had battered the Central China province for days, killing 33, with eight people still missing by 10 a.m. on Tuesday, but the final death toll could be much higher. The provincial government hasn’t updated the death toll since Tuesday, but in Ningxiang county alone, 44 people were reported killed or missing as of Friday morning, local authorities said.

It is common practice in China to discharge water from reservoirs to flood rural areas to protect densely populated urban centers. Statistics from the provincial water conservation department show 274 millimeters (10.78 inches) of rain fell on Ningxiang during the 24-hour period till 8 a.m. on July 1, pushing the water level at the reservoir from 162.6 meters to 166.4 meters, which was above the safe level of 164 meters.

Residents of Ningxiang county, which is about 40 kilometers (25 miles) northwest of Changsha, said that they understood the government’s move, but were angry at being “notified at the last minute.”

An official from the flood control center in charge of the Huangcai Reservoir told Caixin that they started notifying downstream townships and village authorities shortly after 6:30 a.m. on July 1 about the decision to release water. They sent out the notice again a half-hour later, he said. But the official, who asked not to be named, added he had “no idea” why the notice didn’t reach shop owners in Ningxiang until late afternoon.

Chen, who lived near their store, said his family was “lucky to be alive,” but when they returned to the area on Sunday night, his shop and six small warehouses were still flooded. He estimated he has lost 800,000 yuan ($117,600) worth of goods.

The reservoir was about 50 kilometers from the center of the county where thousands of small shops operated at several retail and wholesale markets. Yige Garment Co., with a warehouse on Chuwei Road in Ningxiang, lost more than 4 million yuan to the flood, according to its manager, Jiang Zuoliang.

Jiang told Caixin that he heard about the sluice gates being opened only from someone on a motorbike shouting out the notice in their area at around 5 p.m. on July 1. The man warned floodwaters could rise up to 2 meters. It was unclear whether he was a county official.

That left the company no time to call in trucks to ferry goods to higher ground, and a lot of workers had already gone home by then, Jiang said.

Zhang Zhaohui, who owns a street-front shoe shop on Gongmao Street, tried to choke back tears while she counted her losses that could be as high as 290,000 yuan.

She said she had taken precautions by moving her inventory to shelves 1.8 meters above ground level because of her past experiences with floods, but her inventory was destroyed after the water rose to 2.8 meters.

The government notification, which came late, had only said the floodwaters would rise to 1.5 to 2 meters, Zhang noted.

Many shop owners said that they should have been warned at least three hours in advance so that they had time to move their goods to higher ground to minimize losses.

The floods, which hit Ningxiang county the hardest, have affected 11.46 million people, or 17% of the entire population of Hunan, according to the provincial Civil Affairs Department. The floods also washed away 29.5 billion yuan from the local economy, with damaged homes and destruction to crops, according to the local government.

Floodwaters had largely receded by Tuesday, but on Friday, streets in Ningxiang were still covered in mud mixed with garbage, while shop owners were seen calculating their losses.

The official from the flood control center in Changsha played down the impact of the decision to empty the reservoir. He said water from the Huangcai tank was released at a maximum speed of 400 cubic meters (14,126 cubic feet) per second, while swirling floodwaters after the rain flowed at a speed of 5,800 cubic meters per second on the same day.

Most of the damages to shop owners were caused by floods after heavy rainstorms on the previous day, he said.