By Li Rongde and Wang Jing 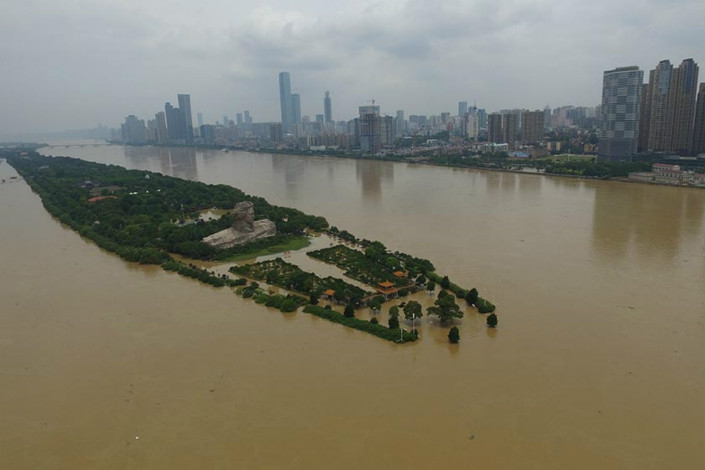 Floodwaters on Sunday partially engulf an island in the middle of the Xiangjiang River in Changsha, capital of central China’s Hunan province. The island, home to a statue of former Chinese leader Mao Zedong, is famous for a 1925 poem by then-32-year-old Mao on his ambitions to change the country. Photo: Visual China

(Beijing) — Recent flooding in central China that has killed at least 24 people in Hunan province has put officials on edge about the possibility of a repeat of a deadly 1998 flood that wreaked havoc across central and southern China.

The flooding has affected more than 6.6 million people in 13 cities and prefectures in Hunan and caused nearly 16.2 billion yuan ($2.39 billion) in direct economic losses from damaged homes and lost crops by 9 a.m. Monday, according to the Hunan Provincial Civil Affairs Bureau.

Hunan received about 407 millimeters (15.75 inches) of rain in June, about 20% more precipitation than it received in the same month in 1998, official statistics show.

An immense flood triggered by torrential rain in the summer of 1998 killed more than 4,000 people and caused 166 billion yuan — about $20 billion at the time — in damage in Hunan.

This year, most of the precipitation in Hunan has fallen over the past 10 days or so. More than 270 millimeters of rain fell in the province on average from June 22 to early on Monday. Hunan’s capital of Changsha was hit the hardest after it received more than 450 millimeters of rain in the same period, according to the province’s water conservation authority.

Luo Yu, who lives in the city’s Yuelu district, said that it is frightening to see water overflowing the banks in some areas, though there was no threat of a breach where he lived. “Still, many roads in my area have been closed, which makes commuting extremely difficulty,” he said.

Government vehicles with loudspeakers were seen roaming the Wangyue Lake neighborhood, urging residents to evacuate the low-lying area of the district with their IDs and valuables.

About 150 trains coming and going from the province were suspended on Sunday alone, according to the railway authority.

Flooding triggered by heavy rain in eight southern provincial-level areas, including Hunan and the Guangxi autonomous region, killed 33 and led to 18.9 billion yuan in losses, according to the Ministry of Civil Affairs.

As of 11 p.m. Sunday, at least eight people had been killed in a landslide triggered by heavy flooding in Quanzhou county in Guangxi, according to the official Xinhua News Agency. Nine others were still missing.

Flooding triggered by incessant rain since June 22 has left 34 injured and caused 1.5 billion yuan in damages in the small county of 830,000 residents.