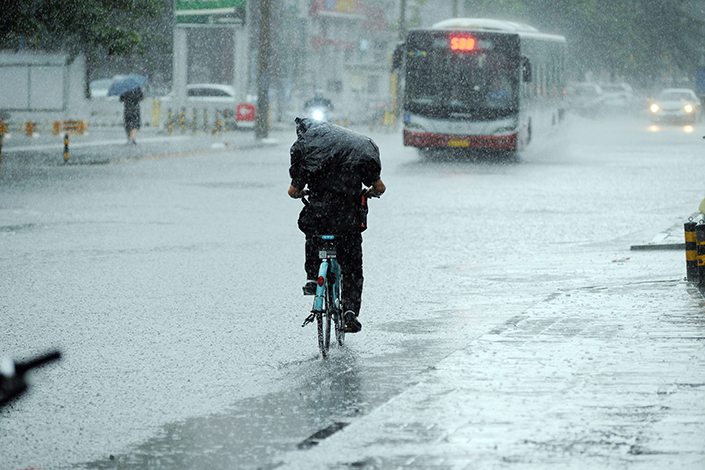 A downpour since Thursday has led to hundreds of flight cancellations in Beijing. Above, heavy rain and booming thunder have driven away most of the traffic in Beijing’s Haidian district on Friday morning. Photo: Visual China

(Beijing) — Wind and rain continued to batter Beijing late Friday in the midst of a booming thunderstorm that led to hundreds of canceled flights and disrupted traffic around the city over the past two days.

A total of 453, or 26.9%, of the 1,679 flights scheduled at Beijing Capital International Airport for Friday were canceled by 6 p.m., according to a notice posted on the airport’s official microblog.

The airport warned that there could be more cancellations if the weather remains bad, and it advised travelers to check with their airlines for any changes to their flights.

On Thursday, nearly 18%, or 277, of the airport's 1,566 planned flights in and out of the city were canceled by 8 p.m. because of the weather, according to the airport authority.

Wang Xiujuan, who works for an online video company in Beijing, had planned to fly back to the city from a business trip to Shanghai on Thursday afternoon, but had second thoughts after she heard about the incessant rain in Beijing.

“I decided to switch to a high-speed train at the last minute,” she said. “We were lucky to get our hands on the last few tickets available.”

An average 65 millimeters (2.56 inches) of rain was recorded in the Chinese capital from noon Wednesday until 8 a.m. Friday, according to the Beijing Meteorological Service — less than what was forecast. The scenic area in Huairou district known as Huanghuacheng recorded the most rainfall — 146.8 millimeters — over the period.

Heavy rain usually falls in Beijing in July and August, according to the National Meteorological Center (NMC). The combined precipitation in the two-month period on average accounts for over 56% of the year-round total, NMC statistics showed.

There were no reports of deaths nor injuries linked to the storm, but many areas in the city were flooded.

As the city braced itself for the storm, Beijing party Secretary Cai Qi and acting Mayor Chen Jining urged citywide officials on Wednesday to remain vigilant to minimize losses from flooding.

Floods triggered by the worst torrential rain in over six decades killed 79 in Beijing on July 21, 2012, prompting authorities to upgrade the city’s drainage system.

Meanwhile, the NMC maintained a nationwide yellow rainstorm alert — the third in a four-tier, color-coded storm warning system — that was issued Thursday for eastern parts of Hebei province, southern parts of Tianjin and much of southern and eastern China.