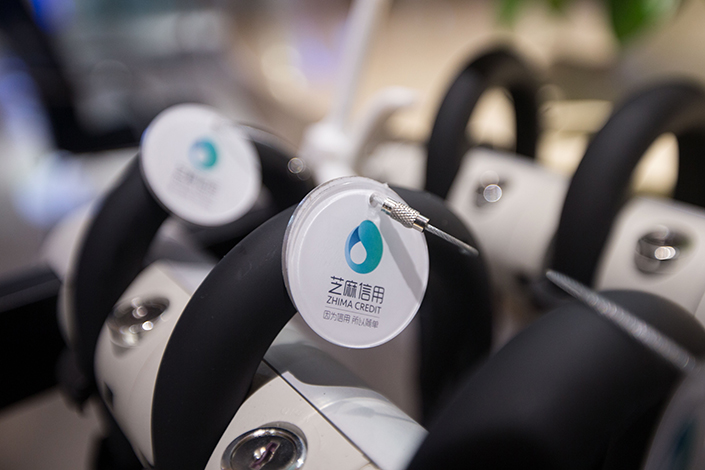 Individuals deemed “financially reliable” by Ant Financial Group’s Sesame credit system will be spared a trip to the bank when filing visa applications to Japan and Luxembourg. Photo: Visual China

(Beijing) — Individuals deemed “financially reliable” by Ant Financial Group’s personal credit-rating system will be spared a trip to the bank when filing visa applications to Japan and Luxembourg, the company said Tuesday.

Those assigned a high score on Sesame Credit — the personal credit-assessment program developed by Ant Financial — will be exempt from the normally required process of submitting bank records when applying through the e-commerce giant’s travel-booking arm for visas to Japan, and Schengen visas to Luxembourg.

The exemption threshold for Japan has been set at 750 Sesame points, while a score of 700 will suffice for travelers to Luxembourg. The perk is currently available only to residents of five of China’s eastern provinces.

Sesame Credit scores range from 350 to 900, and are compiled based on 100 payment-related data sets harvested through Ant Financial. The system has currently rated about 100 million users.

Some of the more heavily weighed criteria include online spending records, regular payments of utilities, timely settlement of credit card bills, frequent booking of trips and accommodations using payment platform Alipay, as well as the user’s city of residence and ownership of a house and car. The scores of acquaintances are also factored into a person’s final tally.

But there is no clear indication of what exactly constitutes Sesame’s definition of an “extremely creditworthy” individual — with a score between 700 and 900 — or what would make a user merely “average,” scoring between 550 and 600.

A company spokesperson told Caixin that Sesame’s algorithms are “beyond the realm of advanced mathematics,” and vary from person to person.

Normally, Chinese citizens are required to present bank records for the past three months when applying for a Schengen visa for Luxembourg. The bar is even higher for a five-year multiple-entry visa for Japan, with applicants required to prove that a minimum of 500,000 yuan ($73,600) has been deposited into their financial accounts over the course of the past year.

This is the second travel benefit granted to qualified Ant Financial users seeking entrance to tourist destinations. In 2015, Alibaba’s travel-booking platform Alitrip introduced an initiative allowing users with a credit score of 700 or above to use a simplified application to apply for a Singaporean visa.

Ant Financial said figures on the number of users who have used the Singapore visa process were unavailable.

The company has been incrementally adding other, non-travel-related privileges for users with higher Sesame scores, mostly in the form of waived deposits for various services, such as bike and car rentals.

Sesame Credit is one of a few companies handpicked in a program run by China’s central bank to tentatively open the country’s private-sector personal credit-reporting system. In 2015, Ant Financial and seven other companies, including subsidiaries of Tencent and Pingan, were given a chance to prove their viability in attaining a third-party credit-rating license.

None of these guinea-pig firms has convinced authorities of its competence, however, with their respective performances all falling “short of expectations,” according to Wan Cunzhi, director of the People’s Bank of China’s Credit Information System Bureau.

Banks and private lenders are dubious about the reliability of the assessments made by firms like Sesame. Wan told Caixin that often the scores are a poor reference for an individual’s actual financial trustworthiness.

“Personal credit-rating information should only be used for risk control in lending activities, and should not be widely used by governments and companies as a tool to regulate citizen behavior,” he wrote.