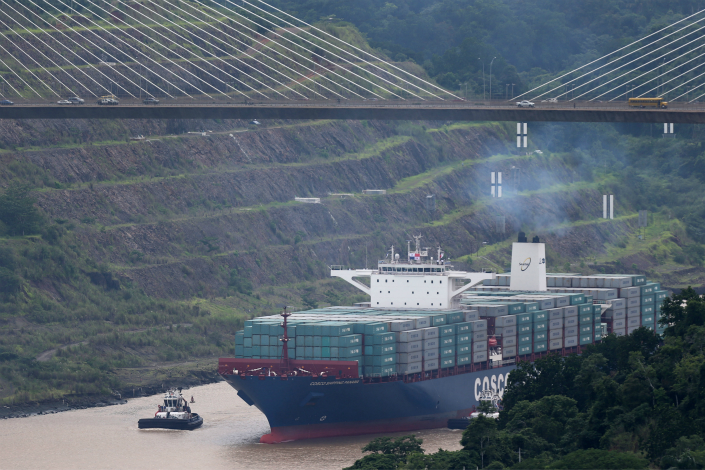 Chinese Shipping giant COSCO has reported it will return to profitability this year. Above, the Cosco Shipping Panama passes through the Agua Clara lock of the Panama Canal in June 2016. Photo: IC

(Beijing) — State-run shipping giant COSCO is expected to post stronger profit gains for the first half of the year, after losing nearly 10 billion yuan ($1.47 billion) in 2016 amid a prolonged industry downturn.

The company’s average freight rate for the container shipping business increased from last year, as cargo volumes grew by 34.72% year-on-year, the company said in a stock exchange filing.

Growth was driven by the completion of a merger plan aimed at stemming years of losses among shipping firms, and the steady recovery of China’s shipping industry.

The merger plan, which created a new parent company, China COSCO Shipping Corp. Ltd., through the consolidation of two state-owned shipping giants, brought about financial improvements after the deal was completed at the end of 2016.

COSCO Shipping Holdings’ predecessor China COSCO Holding Co. recorded losses of 10 billion yuan and 9 billion yuan in 2011 and 2012 respectively. It struggled to remain profitable between 2013 and 2015 by selling assets and shares, and by obtaining government subsidies.

Xu Jianhua, a transport and logistics professor at Shanghai Maritime University, said 2016 had been one of the worst years for China’s container shipping industry, but the industry had begun to recover this year.

Last year, new ship orders declined globally. The total capacity of all vessels on order by the end of 2016 equaled a significantly low 13% of the industry’s current operating capacity, Xu said.

COSCO is the first shipping company to publish first half earnings for 2017.

Xu said he believed the majority of Chinese shipping companies will become more profitable in the second half of the year, as the upcoming third quarter is normally the peak season for container shipping demand.

In the first quarter, the nation’s publicly listed shipping companies reported combined net profits of 1.6 billion yuan after losing a total of 5.4 billion yuan in 2016, according to an Industrial Securities report in May.