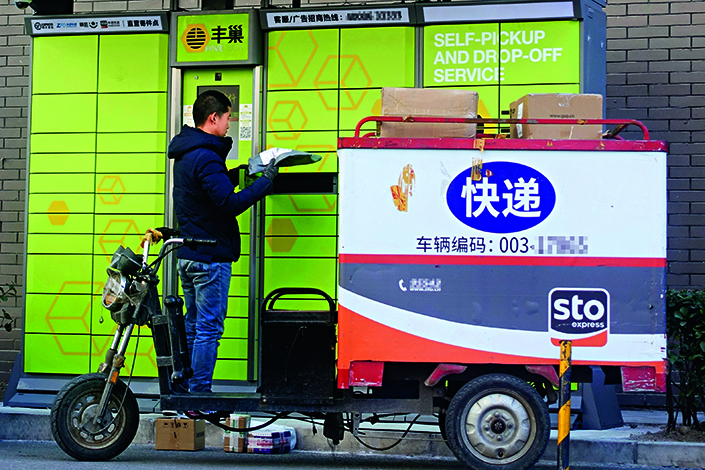 Banks of lockers have been appearing around Chinese cities as places to drop off and pick up packages on the last leg of delivery, saving couriers money and customers time. Above, a YTO Express deliveryman puts packages into a HiveBox locker in Beijing's Chaoyang district on March 5. Photo: Visual China.

(Beijing) — China’s package delivery industry has pinned its hopes for solving one of the business’s more-intractable problems on the ordinary locker.

Little different than those used to store sweaty gym socks or student backpacks, banks of unassuming lockers have been appearing around Chinese cities over the last few years as places to drop off and pick up packages on the last leg of delivery.

Companies such as Chengdu Santai Holding Group Co. Ltd., a Shenzhen-listed firm that used to make safes, and a unit of package delivery giant SF Express Co. Ltd. have been installing banks of lockers in residential neighborhoods as a way to solve the industry’s “last mile” problem.

The last mile refers to the final leg of a parcel’s journey — usually from a delivery company’s neighborhood transit station to the recipient’s doorstep. It is one most expensive problems facing China’s 400 billion yuan ($58.8 billion) package delivery industry. Although the last mile makes up 5 percent of the distance of the average package delivery, it accounts for more than 50% of its time and 50% of its cost, according to a report by China’s State Post Bureau.

“The last battleground in the private courier business is going to be over the last mile,” an industry insider told Caixin.

The report noted that last-mile costs may soon drag down the 50% annual growth rate that has spawned the world’s largest private courier market.

The purpose of the parcel pickup stations is to provide couriers with a centralized location to deliver all of a neighborhood’s packages, sparing couriers the need to go door to door for every delivery. For recipients, the stations aim to make missed parcels and phone calls from deliverymen a thing of the past. However, the rapid expansion of these stations has produced problems of its own, including low demand from recipients, an unproven business model, and a nasty row between two industry heavyweights.

Locking up the last leg

The final leg of delivery is a tedious process that starts with the sorting of parcels by address. Batches of packages bound for the same neighborhood are assigned to couriers charged with making door-to-door deliveries. Each deliveryman usually makes stops on multiple floors of each apartment building they visit. If no one comes to the door, they have to spend time phoning the recipient, who often tells them to come back the next day.

Because of the poor economies of scale, this part of the delivery process accounts for about half the price of each delivery — currently about 13 yuan per item, according to the State Post Bureau’s report.

Sometimes a recipient instructs a deliveryman to drop off the parcel at a nearby convenience store or apartment management office, which typically charges a small fee for a day’s safekeeping. In the past, mom-and-pop convenience stores, security guard offices and real estate agencies have taken on this sideline business, which the locker stations aim to appropriate.

Usually installed in communal areas of residential compounds, these pickup and delivery stations are little more than refrigerator-sized banks of lockers, similar to a wall of safety deposit boxes at a bank. It typically costs a deliveryman 1 yuan or less to drop off a package. The station then sends the recipient a notification on his or her phone along with a code that will pop open the locker.

These locker stations have been tried and tested. In 2012, Amazon.com Inc. began installing them in convenience stores in the U.S. and Europe. The business model is simple enough: The locker operators rent space from apartment complex managers and collect fees from couriers, as well as customers who fail to retrieve their packages within a day or two. Some also sell advertising on video screens attached to the stations.

There are only rough approximations of the scale of China’s locker station business. The State Post Bureau estimates there were 30,000 locker stations in China in the middle of 2015. Approximately a year later, the number had increased fourfold to more than 120,000. Just four months later, another 50,000 lockers had been installed.

Locker operators, at least, seem convinced of their efficacy and are aggressively staking out territory. Business is booming for smart locker manufacturers, such as Santai Holding, the former safe-maker, which is a subsidiary of a state-controlled builder of shipping containers. Their customers include delivery companies such as YTO Express Group Co. Ltd. and SF Express.

Locker sales are so good that manufacturers like Shenzhen Zhilai Sci And Tech Co. Ltd. are going public. The Shenzhen-based company that began as the humble maker of supermarket storage lockers has acquired a voracious appetite for expansion and aims to raise 700 million yuan in an IPO this year. According to its prospectus, locker demand has skyrocketed over the past year, and revenue from locker making has increased tenfold from two years ago.

Current estimates put the number of locker stations, which cost about 9,000 yuan on average to produce, closer to 200,000. Zhilai expects the market to keep growing. It plans to spend more than half of the funds raised through its IPO on a facility to crank out 20,000 more locker stations each year.

Running in the red

According to their proponents, locker stations will be a boon for the package delivery industry. Deliverymen able to drop off four times as many parcels each day, shortening their average seven-minute task by more than half. The overworked courier might never need to climb a flight of stairs again. The reality, however, is less rosy.

There are also questions about the business model. To gain or retain market share, most locker station operators do not charge either deliverymen or package recipients to store their parcels.

Santai Holdings, which operates one of the most widespread brands of locker stations, Sposter, has been branded with an “ST tag” — a designation that the securities regulator gives to companies that have had at least two consecutive years of losses. The company has been running in the red for three straight years and is now in danger of being delisted from the Shenzhen Stock Exchange. In its annual report, the company said its losses are a result of its aggressive deployment and subsidizing of Sposter stations.

Meanwhile SF Express, which started its own franchise, HiveBox, in 2015 by roping in three of the five largest courier firms as stakeholders, has also been burning cash at an astonishing rate — 236 million yuan in one year.

But the bottom line is just one aspect of this cutthroat industry, as the recent tussle between SF Express, China’s top delivery firm, and Cainiao Networks, a platform that generates 80% of the nation’s shipping orders, demonstrated last month.

In early June, the two parties accused each other of prying into what they each saw as private industry data.

Cainiao, which is 47%-owned by China’s dominant e-commerce company Alibaba Group Holding Ltd., was initially set up to dispatch and track orders placed through Alibaba’s online platforms Tmall and Taobao. Last month, it accused HiveBox of giving SF Express data about stored parcels that had been delivered by rival delivery companies.

At the same time, HiveBox accused Cainiao of making unreasonable demands for data about orders that were tracked using rival logistics networks. During the dispute, SF Express refused to send back updates on its parcels to Cainiao, rendering the Tmall or Taobao orders that it delivered untraceable on Alibaba sites. In retribution, Alibaba’s Cainiao removed SF Express from its list of delivery companies that e-commerce merchants could choose from.

The country’s usually passive postal regulator had to step in to settle the matter. But the incident demonstrates the value that companies in the industry place on the precise, last-mile data that locker stations can collect.