Specialty Steel Giant on Brink of Bankruptcy Is Rescued

By Coco Feng and Fan Ruohong 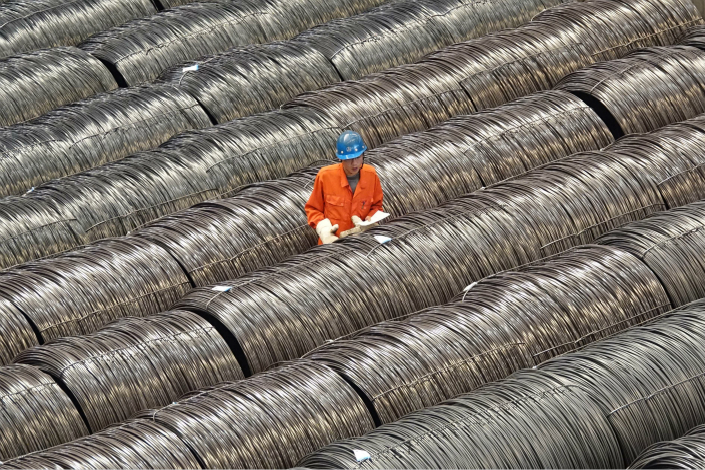 Debt-strapped Dongbei Special Steel Group Co. Ltd., together with its subsidiaries, has defaulted on 7.2 billion yuan in debt since March 2016. Above, an employee of Dongbei Special checks product markings for steel alloy on May 15 in Dalian, Liaoning province. Photo: Visual China

(Beijing) — China’s largest specialty-steel producer just evaded going bust, after at least two peers jumped in to bail it out.

But on Friday, Bengang Steel Plates Co. Ltd. — a subsidiary of Benxi Steel Group Corp., China’s 10th-largest steel maker in terms of capacity — passed a proposal to buy 10% of Dongbei Special for 1 billion yuan, Bengang said in a filing to the Shenzhen Stock Exchange.

Another steel maker, the country’s third-largest, Jiangsu Shagang Group, had its sister private equity fund come to Dongbei Special’s rescue. The number of shares it bought wasn’t disclosed, but the fund will become the company’s largest shareholder, Shagang said in a filing to the Shenzhen Stock Exchange on Monday.

The draft reorganization plan hasn’t been finalized yet, Shagang said in the Monday filing. But Dongbei has at least secured promises for injections of new funding, which is crucial for its reorganization.

As China’s economy slowed and overcapacity problems hit the steel sector, state-owned Dongbei Special started to show its underperformance in March 2016 when its chairman, Yang Hua, died after hanging himself. Its bond defaults were the first by a state-owned company. The government has in the past been expected to save its own assets.

The team behind Dongbei Special’s bankruptcy reorganization consists mainly of officials from Liaoning province, where the company is based.

Bengang said in a statement its capital infusion will “help introduce corporate management experience to Dongbei Special and its two subsidiaries, as well as contribute to their recovery.”

But the rescuer also warned that “there are still risks that the reorganization might end up failing to get Dongbei Special to recover.”

China’s fourth largest steel maker, Anshan Iron and Steel Group Corp. (Ansteel), is reportedly to contribute to Dongbei Special’s reorganization by buying 51% of its shares, according to Bloomberg. But no official statement has been made.

Ansteel is to merge with Bengang’s parent company, Benxi Steel Group Corp., said a person close to China’s top policymakers. The possible merger will become the second deal after the marriage between Baosteel Group and Wuhan Iron & Steel Group (WISCO), which will further push the steel sector to slim down and improve efficiency.