By Hou Wen and Yang Ge 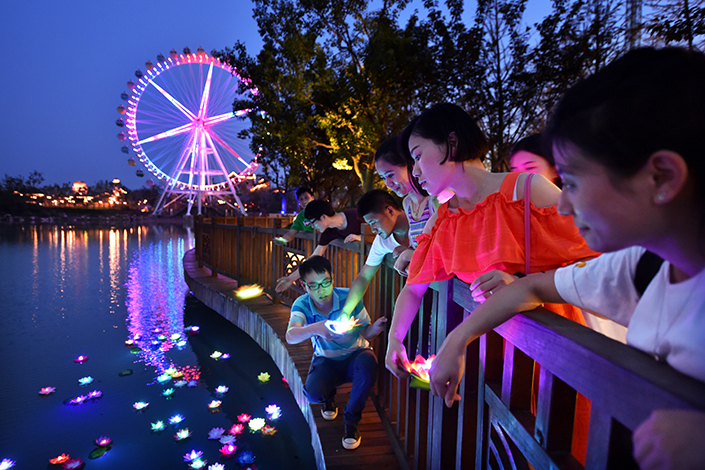 Dalian Wanda Group said on Monday it will sell its recently opened string of mega-resorts in China to real estate company Sunac for 63.17 billion yuan ($9.34 billion), as it offloads assets in a drive to transform from its property-developer roots into a diversified entertainment company.

The move surprised many observers since Wanda had previously given no indication that it wanted to sell the highly trumpeted mega projects in 13 cities, some costing $1 billion or more.

But the company may be looking to pay down debt incurred from the massive projects, along with a number of costly overseas acquisitions worth billions of dollars over the last five years. At the same time, the company’s $5 billion privatization of its formerly Hong Kong-listed real estate unit may have stalled, potentially leaving Wanda founder Wang Jianlin in need of cash to pay back the buyout’s backers.

“In fact, Wanda’s debt load at this point isn’t heavy,” Wang told Caixin after announcement of the blockbuster deal. “Through this transfer of assets, our debt ratio will go down sharply. This recoup of funds will all be used to pay off loans, and Wanda plans to pay off most of its bank loans by the end of this year.”

Sunac Chairman Sun Hongbin told Caixin his company is financing the purchase with its own resources, adding that Sunac had more than 90 billion yuan in its accounts at the end of June.

Under the new plan, Sunac will pay 29.6 billion yuan to take over 91% of Wanda’s stake in 13 massive theme parks and other cultural projects. Most of those are in smaller Chinese cities off the mainstream tourist maps, including a 1.5 billion yuan project launched last week in a rural area of Guizhou, one of China’s poorest provinces. Wang has said he wants to eventually build up an entertainment empire to rival global giant Walt Disney Co., which operates similar parks as well as a major movie studio and consumer products business.

In addition to the park sales, Sunac will also pay 33.6 billion yuan for 76 hotels that make up another major part of Wanda’s move into the leisure and entertainment business.

Such an “asset-light” strategy is common among global hotel operators like Marriott International Inc. and Hilton Worldwide Holdings Inc., which prefer to focus on brand development and income from services by managing hotels for real estate owners. Disney also engages in such practice by finding joint venture partners for some of its theme parks, including Hong Kong Disneyland and the year-old Disney Resort in Shanghai.

Wanda and Sunac said that branding and management of the hotels and mega-resorts won’t change after the sale, nor will development plans for the projects.

The news sent shares of Hong Kong-listed Wanda Hotel Development Co. Ltd. soaring by as much as 150% during the Monday trading session before the stock closed up 47%. Hong Kong-listed shares of Sunac China Holdings Ltd. have been suspended pending an announcement.

The sale came as a surprise, but appears to reflect Wanda’s ambitions to go asset-light and focus on brand development in its corporate transformation, said Yan Yuejin, director of E-House, one of China’s top real estate services companies.

“From a capital perspective, these cultural and tourism projects have brought on many new pressures,” he said, noting that raising brand awareness of the projects will take time and money. “This is the kind of financial pressure that this type of real estate project will face. This kind of tie-up with a major real estate company will help to quickly recoup its investment and keep to its expansion plans.”

Wanda has burst onto the global stage over the last five years through a series of major acquisitions, as it pursues Wang’s entertainment ambitions. Those include at least three major purchases of global movie cinema operators, led by U.S.-based AMC Entertainment Holdings Inc., which have made Wanda into the world’s largest player. Last year the company also paid $3.5 billion for Hollywood studio Legendary Entertainment.

Following the recent string of acquisitions and other moves into the entertainment space, Wanda now earns more than half of its revenue from sources not related to real estate, the company said in its midyear report released last week.

Last year the company also privatized its formerly Hong Kong-listed property unit, Dalian Wanda Commercial Properties Co., in a deal that valued the firm at HK$34 billion ($4.35 billion). At the time of the move, Wang promised backers of the deal he’d relist the firm in China by September 2018 or pay them 12% in annual returns. But that plan suffered a setback at the end of last year, when the man hired to privatize the firm and relist it on the Chinese mainland abruptly left the company.