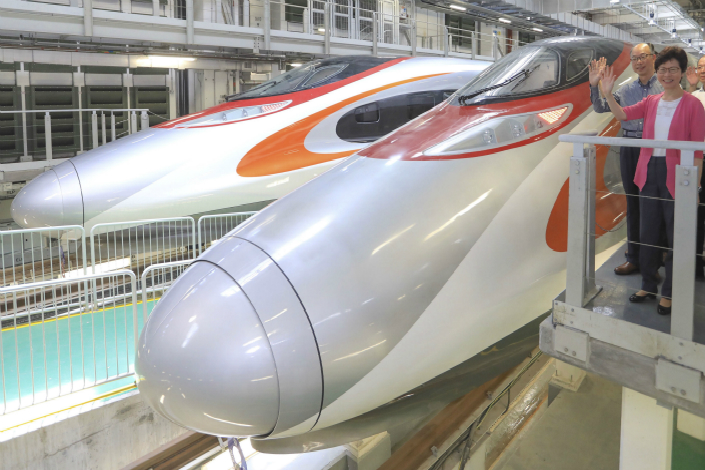 Hong Kong Chief Executive Carrie Lam on Sunday inspects a high-speed train that will be one of the nine operating on the high-speed rail system linking Hong Kong to the Chinese mainland. The system is expected to be up and running in about a year. Photo: IC

(Hong Kong) — One of Hong Kong’s new high-speed trains, which will cut connections to the mainland to under 15 minutes, made a public appearance for the first time when city Chief Executive Carrie Lam inspected one Sunday.

The train Lam inspected, which had arrived in the city on Friday, was the third to be delivered out of the nine that Hong Kong’s MTR Corp. ordered.

It was the first to arrive by rail from Qingdao, where it had been built by CRRC Qingdao Sifang Co. Ltd. — a sign that the tunnel linking Huanggang in Shenzhen and Mai Po in Hong Kong is now complete. The previous two trains had arrived by sea.

Hong Kong’s high-speed rail will connect to the Chinese mainland’s existing network, and is expected to begin operating by the third quarter of 2018, Lam told reporters at the inspection.

Lam also said the Hong Kong government will soon publish and invite public discussion on the “co-location” plan, which will combine mainland and Hong Kong immigration checkpoints into a single facility. The plan could see mainland immigration officers with law-enforcement powers stationed in the centrally located West Kowloon Terminus, currently under construction.

Lam said that the co-location plan in its final form must comply with Hong Kong’s Basic Law, the territory’s mini-constitution.

The Wi-Fi-equipped silver trains, painted with a red, orange and white wave pattern, will have eight cars each, seating a total of 579 passengers. Each train will have two first-class carriages, one at each end, and feature power sockets and wheelchair-accessible toilets.

The newest vehicle was put through braking-system, signal and wireless-communication tests on the stretch of railway between Guangzhou and Shenzhen, MTR projects director Philco Wong said.

The signals and communications systems on the Hong Kong stretch made their first connection with mainland systems on Wednesday, and track-laying is basically complete, Wong added.

When the line opens, trains that depart from West Kowloon will reach Futian, in Shenzhen, in 14 minutes, and Guangzhou in 48 minutes, dramatically shortening cross-border journeys. It currently takes over 30 minutes to travel by MTR trains from MTR’s Kowloon Tong station — much farther north than the planned West Kowloon Terminus — to the border with Shenzhen.

A three-lane bridge between Hong Kong, Macau and Zhuhai on the mainland is on track to open by 2020, with construction on the Hong Kong section due to be completed by the end of this year, according to Hong Kong authorities.

When complete, the bridge could cut travel time by road from one end to the other from as much as four hours now to under an hour.