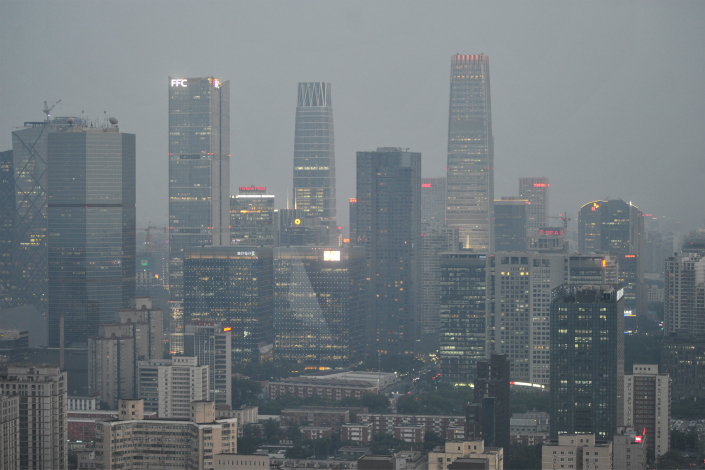 Ozone is becoming a growing problem in North China. The gas has already surpassed PM2.5 as the top pollutant in many cities. Photo: Visual China

As the summer heat continues to grip northern China after nearly two weeks, the readings of a barely visible pollutant — ozone — have been climbing as well.

In Beijing, the indexes of the commonly known small-particle pollutants such as PM2.5 and PM10 index peaked around 90 on Tuesday afternoon, relatively mild for a city that is often shrouded in smog during the winter, when the air quality indexes exceed 400 or even 500. But the citywide ozone index reading on Tuesday was more than 170, and in some areas, such as the Tongzhou district in the east, it was above 210, which meant serious pollution.

Ozone, also known as O3, is a pale blue gas formed through a chemical reaction between nitrogen oxide and volatile organic compounds (VOCs), often under strong sunlight and heat. Exposing long in higher density of ozone can cause harm to people’s respiratory systems. It can also cause headaches, irritate the throat and leave people with a burning sensation in the eyes.

Ozone has passed PM2.5 as the top pollutant in many northern cities recently. In July, Beijing, Tianjin, Shijiazhuang and Xi’an witnessed more than five days of medium or high levels of ozone pollution. Xi’an, the capital city of northwestern China’s Shaanxi province, recorded 15 polluted days in June, with ozone being the top pollutant for all 15 days.

As China sped up its industrialization in the past two decades and became the world’s second-largest economy, it suffered from growing air pollution, especially shortly after Beijing hosted the Olympic Games in 2008.

People started to learn about PM2.5 and PM10, particulate matter smaller than 2.5 or 10 micrometers in diameter respectively, because they pose a direct threat to people’s health. Many such particles are formed from toxic discharges from factories and automobiles.

The situation appears to have improved since the government started taking serious steps to deal with air pollution that has been suffocating cities across the country, including enforcing stricter emission and discharge standards, shutting factories, and closing coal-burning power plants.

However, before people get ready to celebrate the increase in blue-sky days, air quality monitoring services have sounded the alarm about the growing hazard of ozone.

Experts said the emergence of ozone pollution in recent years indicates that China has been focusing more on the reduction on nitrogen oxide than on VOCs, and now has to reinforce efforts to deal with the latter. An estimated 30 million tons of VOCs get discharged from human activities in China each year.

“However, because VOCs involve a large number of different kinds of substances in many industries, they pose severe challenges to monitoring and treatment,” Hao Jiming, director of Tsinghua University’s Institute of Environmental Science and Engineering, told Caixin. “Dealing with VOCs is like jumping into the deep end of air pollution treatment.”

VOCs are produced by many industries, including petrochemicals, printing and packaging, electronics, furniture and pharmaceuticals. Even dry cleaning and restaurants generate VOCs, experts say.

“The biggest problem with the discharge of VOCs lies in the large amounts, wide scope and scattered nature of the industries,” said Ma Yongliang, deputy secretary-general of the waste gas cleaning committee under the China Association of Environmental Protection Industry.

Commonly known VOCs include benzene, formaldehyde, toluene, acetone and styrene. They consist of numerous volatile chemical compounds — some natural, others man-made. These chemicals not only cause ozone to form, but can also be hazardous to human health on their own.

Long-term indoor exposure to benzene and toluene, for example, will leave people with a much greater risk of developing leukemia. “That is why in the past, workers at leather-bag or leather-shoes plants suffered from much higher rates of leukemia,” said Xi Jinying, an associate professor with Tsinghua University’s School of Environment.

From an environmental protection standpoint, it is critical to target VOCs from industrial discharges as they account for more than half of the non-natural emissions, and some of the industrial VOC discharges are highly concentrated and highly toxic, Xi said.

However, because of the variety and ubiquity of VOCs, there are no simple solutions to treat these toxic gases. Systemic researches in the control of industrial VOCs are lacking, and researchers are still exploring different treatment technology for different industries.

Many companies have been joining the market for VOC treatment as authorities have beefed up pollution regulations in recent years. However, because of a lack of standards and the variety of VOCs, polluting factories have found it difficult to choose from among the many companies that offer treatment solutions.

“Often, the factories just blindly choose a treatment service based on whatever the salesmen brag about,” said Wu Keshi, secretary-general of the VOC pollution treatment committee under the All-China Environment Federation.

The prices for VOC treatment services are also too high for smaller enterprises to afford. VOC treatment equipment costs from tens of thousands of yuan to as much as 10 million yuan ($1.47 million). In addition, there are also significant operation and maintenance costs, Xi said.

Xi said it is up to the government to push for the creation of VOC management and treatment standards.

The government has started to pay attention to VOC pollution in recent years. In 2010, the State Council, China’s cabinet, added VOCs to the key pollutants targeted by environmental authorities. Some of the others are sulfur dioxide, nitrogen oxide and small particles like PM2.5 and PM10. In the following years, a number of regulations and discharge guidance documents were released.

In July 2016, the Ministry of Industries and Information Technology and the Ministry of Finance jointly issued a plan to reduce VOCs in key industries. By 2018, China’s industrial VOC emissions will be at least 3.3 million tons less than they were in 2015, the plan said.

More than 40 cities, including Beijing, Shanghai and Tianjin, have published plans to deal with VOC discharges. And 18 provincial-level areas have started to charge fees for VOCs discharges, mainly targeting the petrochemical, packaging and printing industries.

However, experts said authorities have not done enough. Some of the technical guidelines are different in different regions. Other regulations only set standards for limited pollutants. In some places, polluters receive only symbolic punishments, such as fines of 1 yuan per kilogram of VOC emissions.

The monitoring of VOC content in public is also lacking in many areas. Only a few developed cities include VOCs in their citywide air quality monitoring.

In addition, the government is not forcing the polluting factories to install real-time online monitoring systems, Xi said.

But Xi is optimistic about more-comprehensive government actions with VOC discharges in the future.

“The goals of air pollution reduction will gradually come to fruition,” Xi said. “Now that many experts and government bodies are stressing synchronized and coordinated control of pollutants, I believe the time is coming for a comprehensive VOC treatment.”