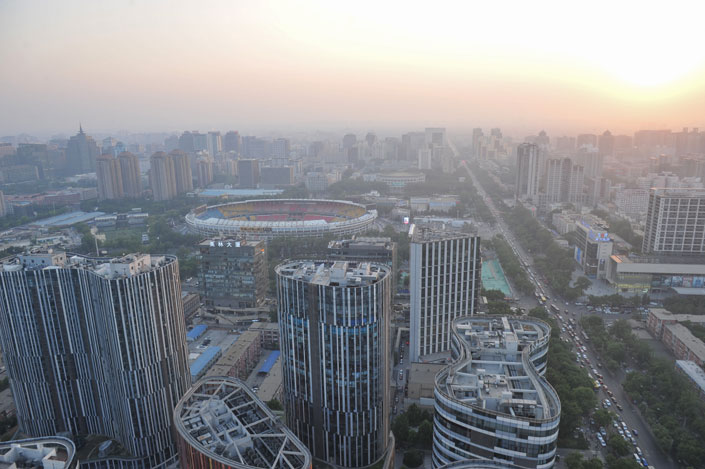 A heat wave sweeping across northern China has elevated the level of ground-level ozone in the Beijing area since Thursday. Photo: Visual China

(Beijing) — Beijing and parts of neighboring Hebei province and Tianjin were blanketed by smog infused with high levels of ozone late Thursday and Friday amid a heat wave sweeping across parts of northern China.

The concentration of ground level ozone peaked at 141 micrograms per cubic meter of air at 2 p.m. on Friday, but it had dropped to 102 micrograms per cubic meter of air by 7 p.m, data from the Beijing Municipal Environmental Protection Bureau showed. The bureau forecasted that after 8 p.m. fine cancer-causing particulates such as PM 2.5 will replace ozone as the main pollutant.

The bad air spell, however, will continue until Saturday when windspeeds are expected to pick up, according to the forecast.

Ozone is an unstable blue gas whose molecules comprise three oxygen atoms instead of the two in molecular oxygen. Ozone can cause asthma and chronic respiratory illnesses and exacerbate other breathing problems, according to the World Health Organization (WHO).

Low-altitude ozone is produced through a chemical reaction between nitrogen oxides and volatile organic compounds, the WHO said. Ozone can also damage crops and is a major source of greenhouse gases.

When the concentration of ozone rises to 200 micrograms per cubic meter of air, it can cause headaches, irritate the throat and create a burning sensation in the eyes, the WHO said.

Much of northern China has been hit by a heat wave since Tuesday, with maximum temperatures around 35 degrees Celsius for four days in a row, while the wind was too weak to blow away the pollutants.

The government can better control ozone levels by targeting motor vehicles, power generators and coal-fired boilers as well as cement plants whose pollutants include nitrogen and other volatile organic compounds, Wang Qifeng, a scientist of environmental studies in Beijing, told Science and Technology Daily.

Ozone pollution has been on the rise in China in recent years, particularly in the Pearl River Delta, the southern manufacturing heartland known as the “world’s factory,” according to Ma Jun, the director of the Institute of Public and Environments Affairs, a Beijing-based nongovernmental organization.

Ozone can choke cities for days even when the levels of fine particulate matter in the air are low and the sky appears to be clear, he said.

It remains an invisible health hazard because no concrete research can quantify the damage from ozone pollution, Ma said.

The average ozone levels in the Chinese capital has been rising steadily until 2015, the latest year for which data is available from the Beijing Municipal Environmental Protection Bureau. It rose from an annual average of 183.4 micrograms per cubic meter of air in 2013 to 197.2 in 2014 and jumped to 226, a peak for 2015. Ozone levels under 160 micrograms per cubic meter of air is considered safe in China, and the 2015 figure was 27% higher than the national standard. Ozone levels rose to unsafe levels mostly from April to October, the city’s Environmental Protection Bureau said.

The bad-air spell follows weeks of clear skies in Beijing, Tianjin and Hebei partly due to traffic and manufacturing curbs ahead of a major international forum on China’s ambitious trade plan, the Belt and Road initiative.