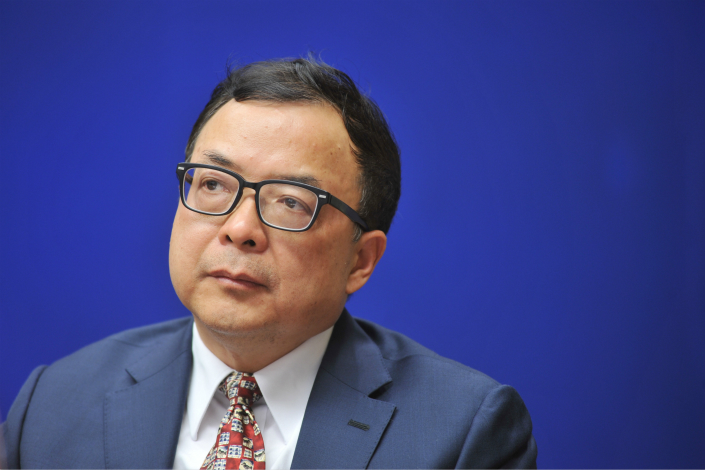 “Most traditional large and midsize insurance companies have kept their risks under control, but hidden risks have piled up at some radical firms that have rapidly expanded their businesses in recent years,” Chen told the official Xinhua News Agency in an exclusive interview.

A liquidity shock could occur if a large amount of an insurer’s wealth management products — the source of much of industry’s short-term funding — mature at the same time, or if a mob of its policyholders cancel their policies at the same time, Chen said.

Those events are a growing possibility considering the industry’s cash-flow situation.

In the first quarter, 17 life insurance companies experienced a net outflow of cash, up from eight insurers in the same period last year, according to data published by the CIRC and the companies themselves. Those with the highest net outflows were the biggest promoters of short-term, high-yield universal life insurance policies, including Foresea Life Insurance Co. Ltd. and Anbang Life Insurance Co. Ltd.

The two companies’ net cash outflows were 13 billion yuan ($1.92 billion) and 5.7 billion yuan respectively in the first quarter, according to Caixin calculations based on company and regulatory data.

The net cash outflows stem in part from the regulator’s crackdown on short-term, high-risk policies — specifically, universal life insurance. The crackdown, which began late last year, has left many insurers unable to raise money to fund their liabilities.

Universal life insurance is essentially a type of wealth management product with a death benefit tacked on. As an investment, it offers a guaranteed return far higher than a bank savings account. The policies were popular with individual investors because they offered high yields and short commitments, but regulators became increasingly concerned about the risks that the products posed to insurers because of the maturity mismatch between the short-term policies and the longer-term investments they were funding.

Chen suggested in the interview with Xinhua that insurers should “lose weight” by cutting out inessential, but quality assets they have purchased on the secondary market, in an effort to take some of the pressure off their balance sheets.