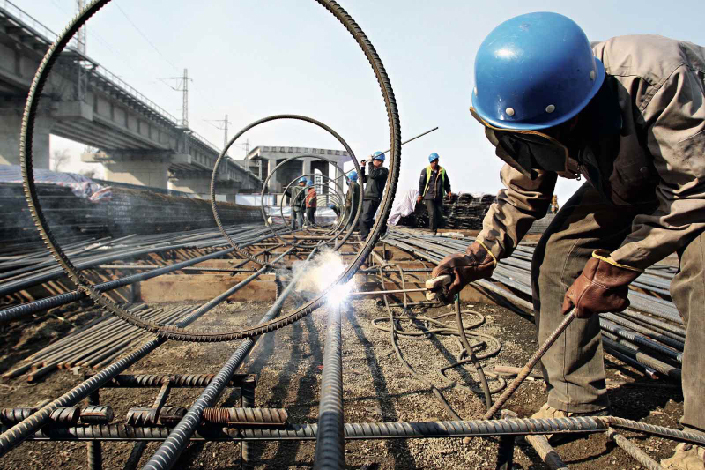 Loopholes in procurement rules have allowed officials to hide borrowing made to fund investment projects. Above, a worker welds a steel frame on March 17 for a bridge under construction on the Songhua River in Harbin, Heilongjiang province. Photo: Visual China

In 2015, the district government of Tongzhou in the eastern city of Nantong, Jiangsu province, wanted to build a wharf. But instead of playing by the rules of the Budget Law and Government Procurement Law and putting the project in the budget, local officials went down a different path to make it easier to get the deal done.

They hid the investment by farming it out to one of the district’s local government financing vehicles (LGFVs), companies set up specifically to fund spending outside of the budget. To get around new rules preventing local governments from using LGFVs to pay for infrastructure construction, officials decided to cheat by classifying the spending as the procurement of services from a company.

But that wasn’t all. Even though local governments are banned from backstopping the debts of LGFVs, the Tongzhou government issued a guarantee letter in November 2015 to CITIC-CP Asset Management Co., a joint venture between CITIC Trust, a unit of a state-owned financial conglomerate, and Eastspring Investments, part of UK financial services giant Prudential Plc. The letter promised to repay the loan and any interest due should the LGFV, Nantong Zhaoxia New Village Infrastructure Construction and Development Ltd. Co., fail to do so. Four months later, CITIC-CP granted the vehicle a 486.2 million yuan ($71.68 million) loan with money raised from the sale of an asset management product.

Unfortunately for Tongzhou officials, their scheme was uncovered by investigators from the Ministry of Finance. The local government was named (link in Chinese) and shamed by the ministry in a note sent in April to the Jiangsu provincial government, which was told to order the Tongzhou authorities to stop offering funding guarantees and to punish the officials responsible.

Tongzhou wasn’t an isolated case. At the end of June, the Ministry of Finance posted a statement (link in Chinese) on its website highlighting another example of the improper use of services procurement by the local government of Zhumadian in the central province of Henan. Not only did officials classify a loan and interest payments of an LGFV as a government services procurement contract, it specified that the debt, amounting to 640 million yuan, would be repaid out of fiscal revenue. The city’s finance department also provided a guarantee to the China Construction Bank to help the company get the loan.

Tongzhou and Zhumadian are just two of dozens of authorities around the country that have been caught breaking laws aimed at controlling and monitoring local government debt, and the cases highlight the continuing battle the central government faces to rein in risks that could destabilize the country’s financial system.

The attention given to the Zhumadian case may well have been an example of killing the chicken to scare the monkeys — making an example of a local authority to serve as a warning to others.

“Some regions have violated national laws and policies governing the procurement of government services to take on debt, turning one of the country’s major reform measures into a covert financing channel, which has severely undermined national security and risk prevention efforts,” the ministry said.

The central government started efforts to clean up local government debt back in 2013, after a monetary and fiscal stimulus launched in 2008 to cushion the country from the impact of the global financial crisis saddled the economy with one of the highest debt burdens in the world when measured against gross domestic product (GDP). A key meeting of the ruling Communist Party in November 2013, the Third Plenum of the 18th Party Congress, set out plans to overhaul the fiscal system and the management of public finances, and make local and central government budgets more transparent.

One problem was that no one knew the size of overall local government liabilities as cash-strapped authorities, who were not allowed to issue bonds to fund the stimulus spending, turned to a range of innovative fundraising channels, including the establishment of LGFVs. The debts taken on through these channels didn’t appear on the books of the local governments even though they were often liable for repaying them or had guaranteed the borrowings of their LGFVs.

The National Audit Office carried out an investigation and found that by the end of June 2013, local governments had racked up total liabilities of 17.9 trillion yuan, including 2.7 trillion yuan of debts they had guaranteed and 4.3 trillion yuan they had some responsibility for repaying.

At the end of 2016, the outstanding combined debt included in the budgets of local governments totaled 15.32 trillion yuan, down from 16 trillion yuan in 2015 and within the cap of 17.19 trillion yuan set by the central government for last year, according to official data.

But the true scale of local government debt could be far higher because of the amount of borrowing that is hidden outside official budgets. There are no government statistics on off-budget borrowing, but some experts estimate it had reached 35 trillion yuan by the end of 2015.

In an effort to make local government debt more transparent, a new Budget Law, which took effect at the start of 2015, officially revoked a 20-year nationwide ban on local authorities issuing bonds. Local governments were also permitted to swap about 14 trillion yuan of debt into bonds over a period of three years starting from 2015, and a series of regulations were issued to rein in LGFV debt and control how and for what purpose local governments were allowed to borrow.

But faced with the requirement to support infrastructure investment to meet the central government’s growth targets, and pay for all the new health, pension and welfare benefits introduced by the previous administration of former President Hu Jintao, many local authorities struggled to find enough money.

The central government has been heavily promoting public-private partnership (PPP) projects, where private investors help local authorities fund infrastructure projects, in an attempt to make up for the funding shortfalls led by the crackdown on shady local government debt.

Yet the initiative has been slow to take off. Data from the Ministry of Finance show that while 11,260 projects with a total value of 13.5 trillion yuan were registered in 2016, only 1,351 deals worth 2.2 trillion yuan were signed.

As they scrambled to fund their investments, many local governments, like Tongzhou and Zhumadian, homed in on a new policy introduced by the State Council in September 2013 that encouraged the use of procurement contracts for services such as elderly care, medical care, education and job training from third-party contractors.

The policy was aimed at helping local governments cope with demand for public services. Local authorities signed contracts to buy services from companies and paid an agreed amount of money every year.

Regulations issued in 2014 on the implementation of the policy allow a local government to pay the company providing it with a service to build assets if they are needed to deliver the service. Spotting a grey area that could be exploited, some local governments started to use this rule to fund a whole range of investments that went well beyond the original scope of the policy, such as rural roads and urban drainage systems. By doing so, they were able to keep the debt off their official budgets. Although that made their debts appear lower, it became harder for the central government to keep track of their liabilities.

The Government Procurement Law gives three categories of items governments can buy: goods, construction and services. Construction was listed, but not as a service, leaving a grey area as to whether it could be considered services procurement.

“Local authorities took it that construction was a service that the government could buy, but that was a very selective way to interpret the law,” a source close to the finance ministry told Caixin.

Local governments liked the contracts because they were not subject to value-for-money analysis or fiscal affordability assessments that could have scuttled the projects.

There are no official data for the size of irregular local government services procurement contracts, although a university professor who studies local government finance and has acted as a consultant for many local authorities told Caixin that he estimates the value at more than 1 trillion yuan.

The Ministry of Finance has become increasingly concerned by the growth in local authorities’ use of services procurement contracts to disguise their borrowings and also by the illegal guarantees that local governments are giving for the loans taken out by companies they sign deals with, which are usually LGFVs.

In a notice published on June 2, the ministry vowed to “firmly stop local governments from conducting unlawful financing in the name” of the program, and released a negative list of government services procurement activities. These included commissioning services for the building of railways, roads, airports, public utilities and farmland water conservancy facilities. Financing services provided by banks and other companies such as financial leasing firms were also declared off-limits. The only construction-related projects to escape a ban were shanty-town renovation and population relocation aimed at poverty reduction.

The ministry also told local authorities that they must not spend money on services procurement projects that are not in their annual budgets.

“Government procurement of services should follow the ‘budget first, buy later’ rule. Funds that are not allocated in the annual budget must not be tapped by government services procurement contracts,” said the source close to the ministry.

Services procurement contracts have tended to be long-term agreements stretching for 10 years or more, far longer than China’s regulations allow for. The ministry reiterated that contract durations must be capped at three years — the most the government’s so-called medium-to-long-term budget plan can cover.

The transport bureau of the Inner Mongolia Autonomous Region in northern China was singled out by the finance ministry in January for signing a 17-year services procurement contract with a highway construction and financing company owned by the regional government, an agreement that helped the firm obtain a 10.55 billion yuan bank loan.

In the wake of the ministry’s June 2 notice, many banks suspended lending to projects related to government service procurement contracts.

According to Chen Shaoqiang, head of the Center for Resource and Environmental Studies of the Chinese Academy of Fiscal Sciences, in just one city in eastern China financial institutions including China Development Bank and Agricultural Development Bank of China had agreed to issue loans worth more than 100 billion yuan in total for such projects where the repayment period spanned 10 to 30 years. But all have now suspended the disbursement of the loans, he said.

The source close to the ministry told Caixin that for projects whose construction has already been completed, local authorities will have to revise their services procurement contracts and turn them into construction procurement agreements, which have stricter requirements on issues such as the selection of the winning bidder. Projects still under construction will have to be funded either through the issuance of local government bonds or by turning them into standard PPPs, the source said.

But for now, the audit office and the finance ministry are left holding down the fort — rooting out illegal behavior, naming and shaming transgressors, punishing officials and forcing local governments to unwind contracts and repay the debts. Whether it will be enough to stem the tide remains to be seen.