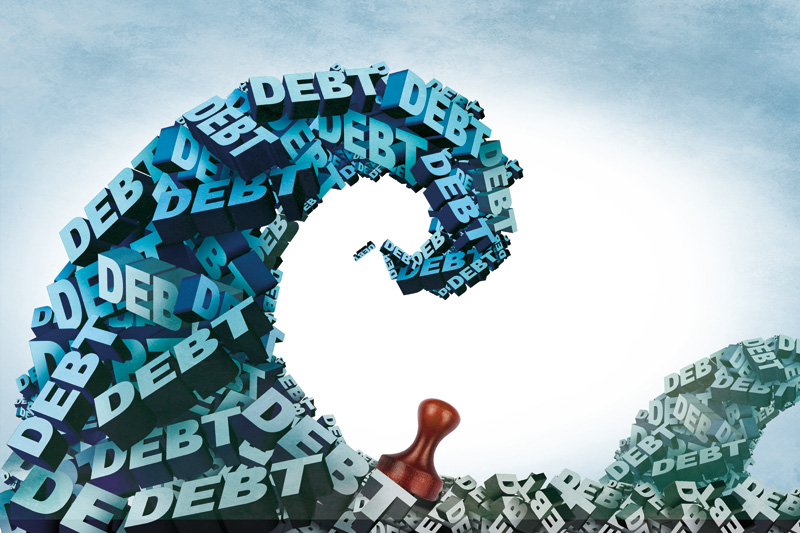 Mounting debt overhang has raised red flags on the country’s economic stability as governments at province, city and county level have borrowed aggressively, sometimes beyond their repayment capacity, to fund infrastructure in hopes of revitalizing local growth after the 2008 financial crisis.

By the end of 2016, combined debt of central and local governments in China stood at 27.3 trillion yuan ($4 trillion), with a debt-to-GDP ratio of about 36.7%. The outstanding local government debt totaled 15.3 trillion yuan, according to official data. Although China’s Finance Minister Xiao Jie said in March that “the Chinese government still has room to borrow more,” the International Monetary Fund in April warned the country’s reliance on debt — funded through an “increasingly opaque and complex financial system” — to drive growth will eventually raise the specter of a “disruptive” correction in growth in the longer term.

To control the spiraling local debt, the central government has since 2014 tightened its grip on local government borrowing through an amendment to the budget law and a slew of policies targeting local governments and their financing vehicles. It also allowed some local governments to swap 8 trillion yuan worth of short-term debts into bonds over the past two years to defuse imminent risks.

But Beijing’s stricter scrutiny hasn’t stopped local governments finding alternative ways to raise cash for local construction that don’t appear on their balance sheet. To get around tighter budget restrictions, local authorities and their financing vehicles have expanded borrowing and stepped up public-private partnership (PPP) projects, in which private investors and local governments work together to finance and develop infrastructure projects. They have issued debts for special investment funds and use of government procurement contracts to continue pumping cash from banks, mostly funds raised from retail investors via wealth management products, into investment projects, analysts said.

“The risks are spreading,” said a source close to the Ministry of Finance who declined to be named, referring to local governments’ backdoor borrowing activities.

“There is plenty of gray zone (in the operation) of PPP, investment fund and government procurement. Local authorities try to get around the (borrowing) rules by promising buyback or fixed yield” to investors, said an official from a local government’s fiscal department, adding such practices are prevalent in east costal provinces.

For instance, some local authorities invited banks and state-owned companies to invest in a PPP project or local investment fund, while promising to pay back their investments with fixed yield at certain time, making the projects nothing more than camouflaged off-budget financing.

Concerns over the hidden debt overhang have spurred a series of regulatory moves since late last year to tighten oversight on local off-budget borrowing activities. On June 2, the Ministry of Finance issued a document to bar local governments from using government procurement contracts to finance infrastructure and land development projects, a practice that largely fall outside regular oversight on local debt.

According to a bank executive, some local authorities have expanded the notion of government’s public service procurement to include infrastructure construction in order to get additional financing from banks and avoid borrowing limits.

The tightened procurement rules followed another key document issued on May 3 by six government agencies, including the National Development and Reform Commission, the finance ministry, the central bank and securities and banking regulators to further regulate local government financing.

Under the policy directive, local governments will be banned from using borrowed money to set up investment funds, from issuing excessive debt through PPP projects, and from offering any implicit guarantee to their financing vehicles. The agencies also ordered local governments to set up debt management teams to audit all local debts and correct all irregularities by July 31.

A finance ministry official told Caixin that the ministry also ordered its local offices to conduct a survey on the debt situation of local governments’ financing vehicles, state-backed companies and other government institutions, involving in investment fund, PPP, government procurement and other possible borrowing activities.

A senior financial regulatory official told Caixin that the finance ministry will speed up to work out unified accounting rules and statistics standards to more accurately monitor local government debts, including the off-budget ones. Local authorities will be assessed for their debt risk exposure and officials will be found accountable for irregularities, said the official.

Beijing started to encourage local governments to set up industry investment funds in late 2014, with an intention to push forward the transparency of local government spending.

According to a State Council policy issued in December 2014, local governments were barred from offering direct fiscal subsidies to benefit select companies. Instead, authorities set up special investment funds in partnership with private capital to invest in certain industries.

But in practice, some local authorities swiftly tweak the policies to make such funds a new platform to raise capital for local government and their investment vehicles.

The size of the investment funds range from 100 million yuan to 100 billion yuan, such as the Yangtze River Industry Fund set up by Hubei provincial government.

Analysts told Caixin that in practice many local governments offer implicit guarantee on the repayment or use land or equity as collateral to lure banks and other investors to pour money into the funds, which then are channeled to local government financial vehicles and infrastructure projects.

“There is lots of chaos in government investment funds. It is time to clear them up,” said an official close to the MOF.

PPP programs are also under closer scrutiny as local officials have used such arrangements for extra borrowing that falls outside of normal supervision.

The central government has promoted local governments to form partnership with private investors in infrastructure investment since 2014 with the aim of encouraging private investments while alleviating local governments’ spending pressure. By the end of March, a total of 1,700 PPP projects, such as road construction, water plant and garbage disposal facilities, had been filed to the Finance ministry, involving 2.9 trillion yuan in planned investment.

But in practice, most local authorities have expanded the concept of private capital to cover state-owned companies and design the PPP projects to favor certain state players.

The true private players have been largely absent in PPP projects as it is difficult for them to access projects with better profit prospect, according to a manager at a trust firm.

Some local government-backed companies have leveraged the PPP projects to tap new bank loans or issue bonds with local governments as the implicit guarantor, analysts said.

While adding government leverage, expanding off-budget borrowing has also fueled concerns over risks stemming from the mismatch between the short-term capital and the long-term nature of the investments being made with the cash, as a major funding source of local PPP projects and investment funds is capital raised through wealth management products that are kept out of commercial banks' balance sheets.

Most wealth management products offered by banks are obligated to pay their investors back in between three months to one year. But the money is invested into long-term infrastructure projects that may not be able to see returns for 10 or 15 years, according to an analyst.

“There are serious problems of maturity mismatch because banks’ wealth management products are packed in a black box and there is no way to tell exactly the maturity of each product involved,” said the analyst.

According to research by Huang Jie, a banking analyst at China International Capital Corp., about 1.1 trillion yuan from bank wealth management funds were invested in PPP, local investment funds and other projects through off-budget borrowing arrangements.

Sources close to the finance ministry said China’s prolonged war against excessive local government borrowing is partly due to the lack of adequate monitoring and precise statistics on local irregular borrowing, as well as toothless accountability mechanisms.

In January, the finance ministry noticed five local governments of Inner Mongolia, Shandong, Sichuan, Chongqing and Henan to fix irregular borrowing activities and punish institutions and officials with misconducts. However, only Chongqing and Shandong have published their punishment results according to the ministry’s requirement so far.

A finance ministry official said in previous supervision on local borrowing, only local governments were accountable for misconducts, but the new policy document issued on May 3 will expand the oversight to financial institutions, law firms and accounting firms, who involve in local debt issuance.