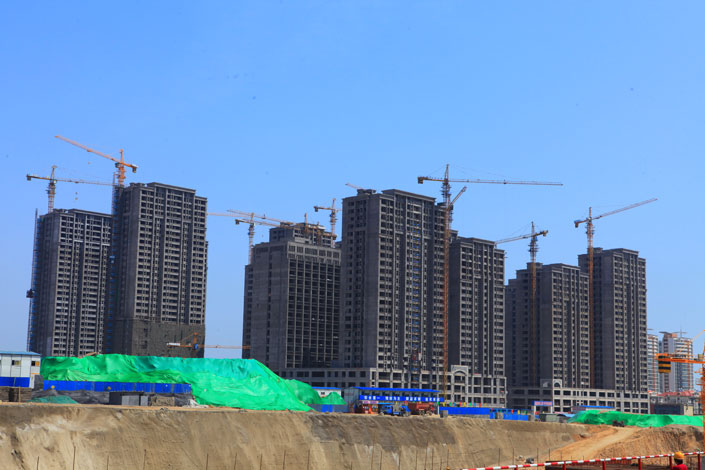 Construction work is carried out on buildings in Rizhao, Shandong province, China, on July 12, 2014. The top 25 land-buying companies spent 494.3 billion yuan in the first four months of this year, nearly double the amount spent in the same period last year. Photo: Visual China

The top 25 land-buying companies spent 494.3 billion yuan ($71.7 billion) in the first four months of this year, nearly double the amount of 254.9 billion yuan in the same period last year, according to real estate agency and research firm Centaline Group.

The voracious demand for land came despite moves by dozens of Chinese cities to clamp down on overheated housing prices since mid-March, most typically by raising down-payment requirements and mortgage interest rates. Some cities have also limited the number of properties each family can own, and a small number of places have banned the conversion of commercial buildings — mainly offices and shops — into homes.

Facing such stiff headwinds, large real estate developers are stockpiling land as they seek to expand businesses from simply selling houses to providing services for properties they retain, according to an opinion piece carried by the state-run Securities Daily.

Many firms see great potential in commercial properties such as entertainment and leisure facilities, shopping malls, exhibition centers and logistics hubs as China’s growth model transforms to rely more on consumption rather than investment and exports, it said.

Leading Chinese developer China Vanke Co. Ltd. acquired two plots of residential land for a total of 3.6 billion yuan on April 28. The company plans to retain more than half of the land to build rental houses, nursing homes, shops, hospitals, schools, offices and other facilities that it will own and operate, as part of its strategy to be an “urban infrastructure service provider” to develop what it calls “new profit-driving engines,” the report said.

Building up reserves of land and maintaining them at a high level is also necessary for smaller companies because the government requires developers to construct infrastructure, ranging from water and natural gas supplies to road and telecommunication facilities, before they can start erecting houses on a piece of land — a process that takes years, it added.

In the first quarter of 2017, land acquired by real estate companies rose 5.7% from the same period last year, compared with a drop of 11.7% in the first three months of 2016, data from the National Bureau of Statistics showed.