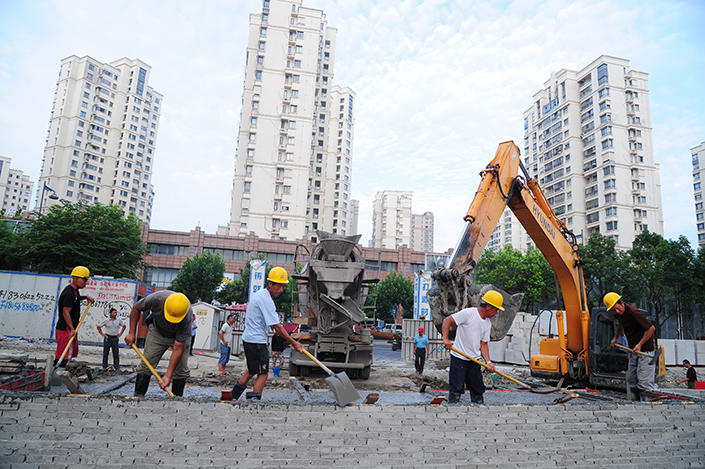 (Beijing) — China’s economy maintained its momentum in the second quarter, as factories produced more goods than expected for both domestic consumption and export.

As the government steps up efforts to curtail risk in the country’s credit-fueled economy and financial system, market consensus is for economic growth to slow, although economists remain divided on how much growth will taper off in the second half.

In the quarter ended June 30, China’s gross domestic product expanded 6.9% from a year earlier, the National Bureau of Statistics (NBS) said Monday. The pace was the same as in the first quarter, which ended March 31, and slightly faster than the 6.8% growth rate projected by Caixin’s poll of 10 economists.

On a seasonally adjusted quarter-on-quarter basis, China’s GDP grew 1.7% in the second quarter from the first quarter.

“The economy continued to expand and improved steadily on a solid foundation during the first half,” NBS Spokesman Xing Zhihong said at a news conference in Beijing on Monday.

“But it’s worth noting that there is still a lot of uncertainty and instability around the world, and China’s domestic structural problems might continue to linger,” he added.

During the first six months, domestic consumption accounted for 63.4% to the GDP growth, Xing said.

The government had expected the year’s GDP to grow by around 6.5% “or higher if possible in practice.” It was interpreted as a more cautious outlook compared with the growth range of 6.5%-7% set for 2016.

China’s two major stock indexes clawed back early losses Monday after the GDP figure was announced. The Shanghai Composite Index ended down 0.11% after falling by as much as 2.5% in early trading, while the Shenzhen Composite Index closed 1.7% lower after diving as much as 4.5%.

Also announced on Monday, China’s industrial output grew 7.6% in June from a year ago, accelerating from a gain of 6.5% in May. The NBS said growth was mainly driven by external demand, with industrial exports up by 11.7% from a year earlier in June.

During the first half, industrial output grew 6.9% from a year earlier. The biggest jump was found in the manufacturing of high-tech products such as computers and cars.

Domestic demand also held up well during the first half.

Retail sales, which include spending by households, government departments and businesses, jumped 11% from a year earlier in June, up from 10.7% growth in May. Analysts had expected 10.6% growth in June.

The service sector, commonly known as the tertiary sector, expanded 7.7% in second quarter from a year ago. The so-called secondary sector — which primarily consists of construction and industries from mining, manufacturing, electricity, water and gas — grew 6.4% from a year ago, according to the NBS.

Government-backed investment in infrastructure, which includes roads, railways and environmental projects, increased by 21.1% year-on-year, up by 0.2 percentage points compared with the same period a year ago.

Meanwhile, property investment jumped 8.5% in the same period, slightly down 0.6 percentage points from the first quarter.

Economists are divided, as usual

Nomura raised its growth forecast after better-than-expected first-half economic growth. It now expects China’s economy to expand 6.8% in the third quarter, up from its previous estimate of 6.6%. The bank has also raised its 2017 annual growth forecast to 6.8% from 6.7%. Despite the upward revision, the bank held to its view of a gradual slowdown in the Chinese economy going forward.

However, Julian Evans-Pritchard, China economist of Capital Economics, said in a note that “the recent crackdown on financial risks has driven a slowdown in credit growth, which will weigh on the economy during the second half of this year.”

Martin Petch, senior credit officer at Moody’s Sovereign Risk Group, wrote in a comment: “In the remainder of this year, we expect GDP growth to slow moderately as the tightening of the shadow banking sector restrains credit availability.”

Last weekend, China President Xi Jinping said the country will set up a cabinet-level financial oversight committee to rein in ballooning risks within the financial system. Such tightening has led some economists to downgrade growth forecasts for China.

Last Friday, China adjusted its GDP calculation method for first time since 2002. But the NBS said Monday the new method was not applied to the second-quarter data.