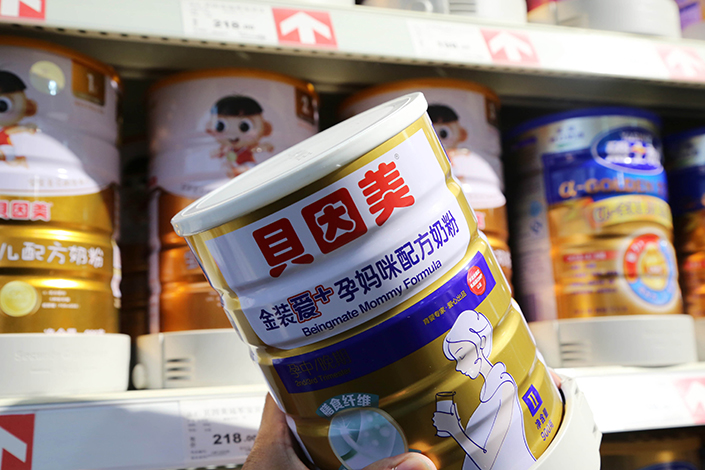 Beingmate Baby & Child Food Co. Ltd. has been asked by the Shenzhen Stock Exchange to turn over documents related to an insider-trading probe. Photo: Visual China

(Beijing) — A major Chinese infant-formula maker has been asked to turn over documents related to an insider-trading probe.

Beingmate Baby & Child Food Co. Ltd. received the request after it revised its earnings forecast from a profit to a loss of at least 350 million yuan ($51.7 million), according to its latest filing to the Shenzhen Stock Exchange.

Three months before the revision, it had forecast at least 20 million yuan in profit in the first half.

Three days before Beingmate revised its earnings forecast to a loss on Friday, its share price plunged by the 10% daily limit over a span of a few minutes, automatically triggering a suspension in the trading of its stock.

Soon after, the company announced that it will keep the trading suspension in place because of a pending deal to sell one of its dairy subsidiaries. Since then, Beingmate’s share price has been stuck at 11.97 yuan, its lowest since November.

In its query, the Shenzhen Stock Exchange ordered Beingmate to disclose any stock transactions made by the company’s executives over the past three months. The purpose of the order was to determine whether the recent plunge in the company’s share price involved an information leak or insider trading. Beingmate hasn’t disclosed its answers to the request.

Since 2013, Beingmate has lowered its earnings forecasts on at least five occasions.

The Hangzhou-based dairy company blamed its most recent disappointing earnings forecast on a major regulatory change that took effect in October.

Under the new regulations, infant-formula makers, both foreign and domestic, must produce no more than nine types of formula under no more than three brands, which will cut the number of baby formula products in China by 75%.

“The industry is undergoing a transition, and competition is still fierce,” Beingmate said.

In 2016, the company reported its first annual loss — 780 million yuan — since it was listed in 2011. Frequent personnel changes since the end of last year, including the resignations of its vice chairman, chief financial officer and deputy general manager, have only added to the uncertainty surrounding the company.

In addition to Beingmate, infant formula manufacturers both at home and abroad have experienced a sluggish 2016. Sales of the country’s largest dairy maker, Yili Group, fell 24%, and sales of the smaller Yashili and Biostime brands plunged by double digits.

French food giant Danone, which owns the popular Nutrilon and Aptamil dairy brands, said developing countries and regions other than China performed well in 2016 due to China’s “fast-changing regulatory environment.”

U.S. infant formula maker Mead Johnson Nutrition Co. said sales in China declined by 3% last year, and warned of the potential negative impact in the near future due to “China’s evolving laws and regulations,” including “limitations on the number of brands and formulations manufactured in one location.”

According to the Shenzhen bourse, Beingmate will receive a delisting risk warning if it reports a loss for 2017.