Hong Kong Passes Baton to Next Generation of Billionaires 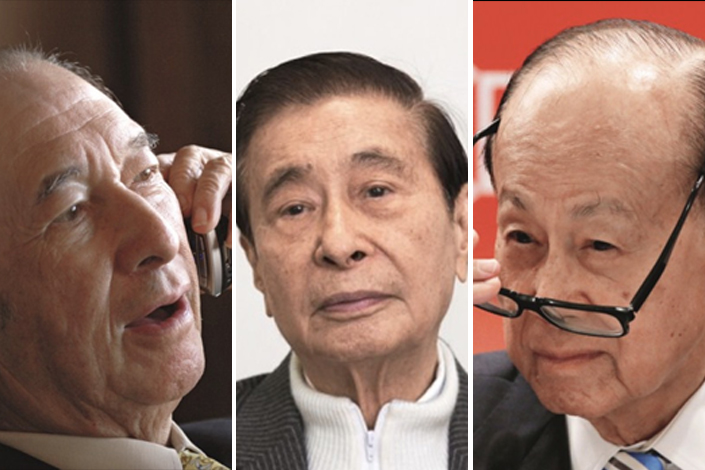 Stanley Ho, Lee Shau-kee and Li Ka-shing (from left to right) represent the first generation of Hong Kong’s business tycoons, who accumulated massive wealth during British rule and after the Chinese mainland’s economy opened up. However, as times change and competition from the Chinese mainland picks up, Hong Kong’s economy is no longer dominated by tycoons or the businesses they control. Photo: Visual China

(Hong Kong) — “I’m in good health. If I decide to retire, there will definitely be an announcement,” Li Ka-shing, chairman of Hong Kong-based conglomerate CK Hutchison Holdings Ltd., told reporters on the driveway of his seaside residence on June 21.

Li was responding to a recent Wall Street Journal article that said the 89-year-old tycoon would retire this year.

Days later, Shun Tak Holdings Ltd., a casino and real estate empire, announced that its 95-year-old founder and chairman Stanley Ho, the “King of Gambling,” had stepped down. His daughter Pansy Ho took over the helm.

Li and Ho are both from Hong Kong’s first generation of homegrown tycoons, who accumulated massive wealth under British rule and after the Chinese mainland’s economy opened.

But now, 20 years after the British handed over Hong Kong to China, signs suggest that the era of the tycoons has come to an end. So, who will take up their baton?

Hong Kong’s first-generation business elites have their roots in the city’s colonial past.

In the late 1970s, shipping magnate Yue-Kong Pao acquired a controlling stake in Hong Kong and Kowloon Wharf and Godown Co. Ltd. (now The Wharf (Holdings) Ltd.), which was founded by British-Armenian Catchick Paul Chater in 1886.

In 1990, Li, who was 62 at the time, landed on the Fortune global list of billionaires with a net worth of $2.7 billion, ranking 47th in the world, and first in Hong Kong. That year, Hong Kong-born Jewish businessman Lawrence Kadoorie — the chairman of a power company now called CLP Holdings — and Yue-Kong Pao also made the list.

But this year, the Hurun Global Rich List revealed a new contender — Wang Wei, founder and CEO of logistics firm SF Express. With a net worth of 186 billion yuan ($27.49 billion), Wang has surpassed Li Ka-shing to become the richest person in Hong Kong. Unlike the well-established Hong Kong tycoons, Wang’s main business is on the Chinese mainland.

Wang’s appearance on the list comes as local giants face increasing competition from their mainland counterparts.

As of mid-2017, nine of the 10 largest companies listed in Hong Kong are mainland Chinese companies like China Mobile Ltd. and China Construction Bank Corp. The only company in the top 10 from outside the mainland is HSBC Holdings PLC, at No. 6.

CK Hutchison Holdings, once the largest, ranks 20th with a market capitalization of HK$378.4 billion ($48.49 billion).

“Over the next 20 years, Hong Kong’s richest families will see their influence on the Hong Kong economy gradually weaken,” professor Joseph Fan, co-director of the Institute of Economics and Finance at the Chinese University of Hong Kong (CUHK), told Caixin.

This is largely due to the city’s charismatic business patriarchs reaching the end of their careers. Excluding 46-year-old Wang Wei, the average age of Hong Kong-based businesspeople on Hurun’s rich list is 80. By comparison, the top 10 billionaires on the mainland had an average age of 52.5.

According to a CUHK study of 217 family businesses in Taiwan, Hong Kong and Singapore, when an Asian family business is passed on to the next generation, the business often loses nearly 60% of its value in the five years before the founder’s retirement and the three years after.

At the moment, of Hong Kong’s four big business patriarchs, only Li Ka-shing has not retired.

Henderson’s Lee Shau-kee retired in 2014. Cheng announced his retirement for the first time in 1989, and his eldest son Henry Cheng took over. But because of the company’s rising debt, the elder Cheng returned in 1991. He retired again in 2012, and died in 2016.

Sun Hung Kai’s Kwok died in 1990. His youngest son, Raymond Kwok, is currently the company’s chairman, while his second son, Thomas Kwok, is serving time in prison for bribing Hong Kong’s former chief secretary Rafael Hui Si-on. Oldest son Walter Kwok effectively handed over duties to his brothers after he was kidnapped in 1997, and was ousted from the family business over a feud in 2008.

“Who can fill Li Ka-shing’s shoes? Victor Li (his oldest son) could be very capable, but he’s too low-key to inherit his father’s contacts and reputation, and outsiders find it hard to gauge his abilities and ideas,” Fan said, pointing to the problems that beset the Kwok family after the death of Sun Hung Kai’s founder.

The younger generation of Hong Kong’s business families have different values from their predecessors: They are less keen on entrepreneurship and more interested in investing, Fan added.

“But, in Hong Kong, land is still the most important and expensive resource. The successors will continue to control and be familiar with Hong Kong’s real estate industry. It is their biggest source of profit as well as their biggest advantage, which they will not easily give up,” Fan said.

A future without tycoons?

Even as Hong Kong’s business families grapple with succession, the city’s government is already imagining a future where tycoons play a diminished role.

Hong Kong’s smaller businesses and startups have long been squeezed by mainland competitors and local oligopolies. Over the years, Hong Kong’s entrenched business elites have contributed to low social mobility and a lack of innovation.

While nearby Shenzhen is busy transforming itself into another Silicon Valley, the “golden age” of internet development seems to have skipped Hong Kong altogether. Over the past 10 years, “new economy” companies listed on the Hong Kong stock exchange accounted for only 3% of its total market capitalization, compared with 60% on the Nasdaq and 47% on the New York Stock Exchange.

In 2015, the Hong Kong Innovation and Technology Bureau was set up to tackle this stagnation and to encourage innovation.

To deal with this, the Hong Kong Stock Exchange announced on June 16 that it was seeking comments about a proposed New Board, and will be reviewing the rules of its Growth Enterprise Market for smaller companies with shorter track records of profits.

In June, businesspeople from Hong Kong and the Chinese mainland gathered at the Guangdong-Hong Kong-Macao Greater Bay Area Forum to discuss regional cooperation and integration, an idea put forward by Chinese premier Li Keqiang in March.

At the forum, Professor Li Zexiang from Hong Kong University of Science and Technology delivered a sobering message for the city’s traditional business families. “Real estate thinking,” “financial thinking,” and “civil service thinking” are major hindrances to the development of Hong Kong’s technology industry, Li said. If Hong Kong wants to “break its stalemate,” it must abandon this mindset.