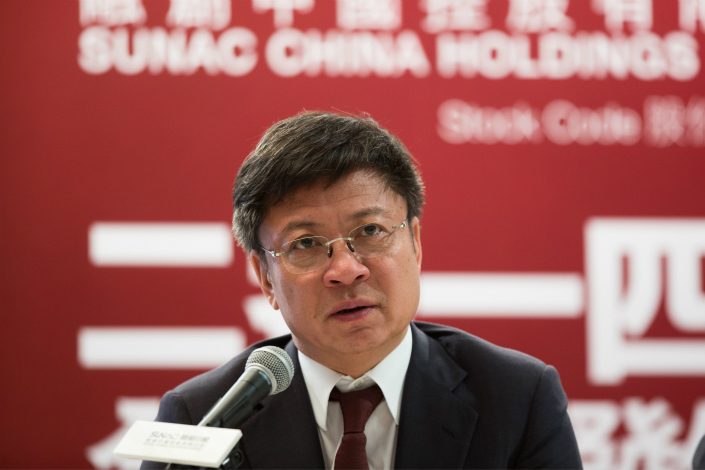 “From what we can tell, banks started reviewing our credit profile after our deal with Wanda,” Sun told reporters in Beijing Tuesday afternoon. “But this is a normal practice among banks. It would be unusual if they didn’t.”

Tuesday’s decline reminded investors of a previous stock- and bond-market selloff last month, when China’s banking regulator asked lenders to assess their credit-risk exposure to companies active in overseas acquisitions, as the country continues to curb a shopping spree that led to a record capital exodus last year.

The market has become concerned with Sunac’s leverage and creditworthiness after its surprise July 10 announcement of a plan to buy assets from Wanda. Fitch Ratings then cut Sunac’s credit ratings by one notch to BB-, citing “less predictable financing standing” after the acquisition, while Moody’s Investors Service warned of Sunac’s increasing financial risks due to its worsening level of leverage.

Sun said Sunac is sitting on approximately 90 billion yuan of cash, of which 50 billion yuan was readily available as of the end of June. He revealed that the planned acquisition of Wanda’s assets will increase the company’s liabilities by about 45 billion yuan.

He told reporters that the recent credit-ratings downgrade on Sunac was “absurd” since the deal with Wanda will not increase pressure on the firm’s cash flow.