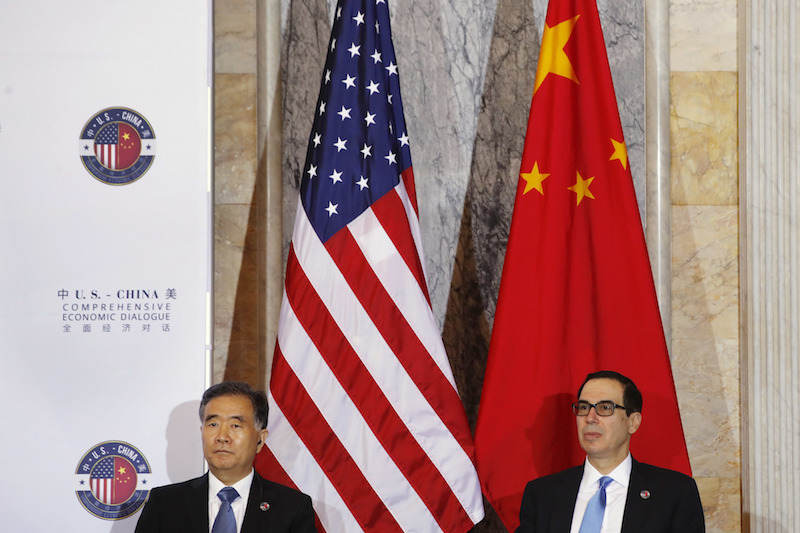 The leaders evolved the U.S.-China Strategic and Economic Dialogue, established in 2009 to support regular interactions between top leaders from the two countries, into four separate dialogues focusing on foreign affairs, the economy, law enforcement and cybersecurity, and people-to-people exchanges. They agreed to a 100-day action plan under the economic dialogue framework to boost bilateral trade and expand market access.

As the 100-day deadline expired Sunday, the CED meeting is expected to provide an opportunity for the two nations to flesh out more trade deals.

At stake is $519.6 billion of trade last year between China and the U.S., compared with $2.5 billion in 1979, the year the two nations normalized relations after decades of Cold War tensions.

“The two sides will explore effective ways to expand cooperation and properly handle differences and promote the development of China-U.S. economic and trade relations in a strong, balanced and sound way,” Lu said at a press conference Wednesday in Beijing.

In opening remarks Wednesday, U.S. Commerce Secretary Wilbur Ross cited the U.S.-China trade imbalance and said it is time to rebalance trade and investment relationships “in a more fair, equitable and reciprocal manner.”

While the U.S. demands broader market access, China has called for the U.S. to remove obstacles to U.S. high-tech exports to China.

At a Tuesday luncheon with Chinese and U.S. business leaders, Chinese Vice Premier Wang Yang, who co-chairs the meeting with Ross and U.S. Treasury Secretary Steven Mnuchin, called on the U.S. to relax its “outdated” controls to allow more U.S. exports of advanced technologies to China.

Wang reaffirmed the importance of China–U.S. cooperation and said it is the only right choice for both countries.

“The giant ship of China-U.S. economic and trade relations is sailing on the right course,” Wang said.

But in a rare move, the U.S. and Chinese delegations both canceled briefings on the talks that were scheduled for late Wednesday afternoon. They provided no explanation.

Tensions over China-U.S. trade have emerged as Trump pledged repeatedly during his election campaign to take a tough stance on Chinese trade practices. But the tensions have softened since the April meeting between Trump and Xi, during which the two presidents agreed on a series of trade issues.

Experts and business leaders said they expect the CED talks to extend the cooperation shaped by the 100-day plan and further smooth the bilateral relationship.

At a Tuesday summit of business leaders from both countries in Washington before the CED talks, Tu Guangshao, president of China’s $813.5 billion sovereign wealth fund China Investment Corp., said he expected government officials and the CED to further expand access and cooperation on bilateral investments between the two countries.

Tu said CIC intends to increase investment in U.S. manufacturing and called for the establishment of a joint fund to help business facilitate direct investments in both nations. About 40% of CIC’s over $200 billion overseas investment portfolio is in the U.S., Tu said.

“We should not punish our tomorrow because of yesterday's problems," he said, adding Chinese and U.S. business leaders should not "let problems of the past limit our future potential."