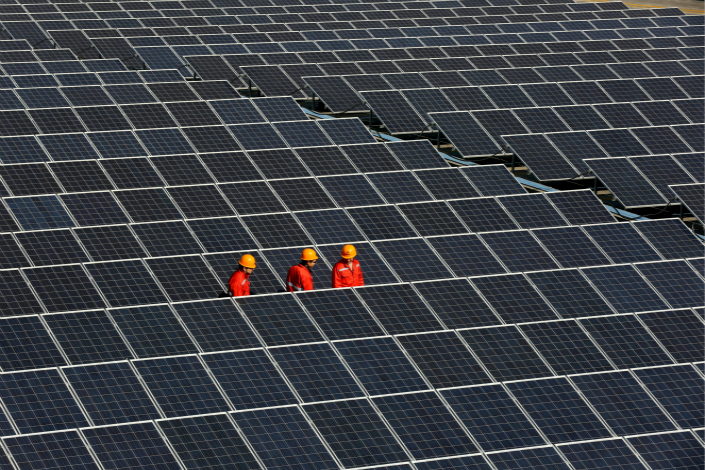 (Beijing) — Clean energy is responsible for a bit more of China’s electricity generation this year, amid ongoing government efforts to reduce excess capacity in the coal sector.

Clean energy sources including nuclear, wind, solar and hydropower accounted for 27.2% of China’s total electricity-production mix in the first six months of the year, said Yan Pengcheng, spokesman of the National Development and Reform Commission (NDRC), the country’s top economic-planning body. That was up 1.8 percentage points from the same period a year ago.

The rise was partly due to government efforts to expand trading of clean energy across provinces at a time when coal was in short supply, he said.

“The gradual increasing of the share of power generated from clean-energy sources will help reduce (the reliance) on coal-burning power plants and effectively ease the demand for thermal coal,” Yan told reporters at a news conference on Tuesday.

He did not provide coal’s share in China’s electricity-generation mix. Figures from the National Bureau of Statistics showed that coal contributed to more than 70% of total electricity production in the first half of 2017.

The amount of power produced from clean-energy sources was equivalent to about 50 billion kilowatt hours of electricity coal could have generated. That represents about 22 million tons of thermal coal saved, he said.

Solar-power generation was a standout in clean-energy production. It soared 80.3% year-on-year. That was followed by a 25.7% rise in wind power and a 20.8% jump in nuclear power. But hydraulic-power output fell because major rivers suffered a low-water period in the first five months of the year, he said.

The NDRC estimates that clean-energy sources will produce the equivalent of nearly 40 billion kilowatt hours of power from coal in the July through September period and save almost 18 million tons of coal. That is partly because hydropower-generation has recovered since June as the country entered the summer flood season.

Coal supply has been strained recently due to spiking demand from steel mills, petrochemical factories and coal-burning power plants, as economic activity picked up, Yan said.

In the first five months of the year, electricity produced by coal-fired power plants rose 6.4% year-on-year while steel output gained 4.4%, leading thermal coal consumption to increase by 10.3%, or more than 60 million tons, according to the NDRC’s figures.

China’s drive to reduce overcapacity of coal and stepped up government enforcement of safety and pollution control rules also affected the supply of the fuel and boosted its prices.

“Some provinces got rid of more coal capacity than expected and in turn had to purchase coal…which broke the resource and transportation capacity balance built through the years and posed new challenges for stable coal supply,” Yan said.

“Major coal production areas strengthened safety and environment protection checks and suspended coal mines that did not meet the requirements. That also had an impact on the production and supply (of coal).”

Beijing launched its campaign last year to trim excess capacity of steel and coal. Major targets include coal mines where production has long been halted and those with serious safety problems.

A total of 290 million tons in coal capacity was removed in 2016. Premier Li Keqiang announced in March that the country aims to close at least 150 million tons of coal production capacity this year.

Yan said 111 million tons of coal capacity was eliminated in the January-June period, meaning 74% of this year’s target has been achieved.

Coal prices have remained high this year. The Bohai-Rim Steam-Coal Price Index (BSPI), which tracks domestic thermal coal spot prices at major ports in northeast China, jumped by more than 60% from January to November last year and hit 607 yuan ($89.8) per ton on Nov. 2, its highest point in nearly three years. The index subsequently fell but bounced back to 606 yuan per ton in March. It is now 581 yuan, up around 3% from a month ago.