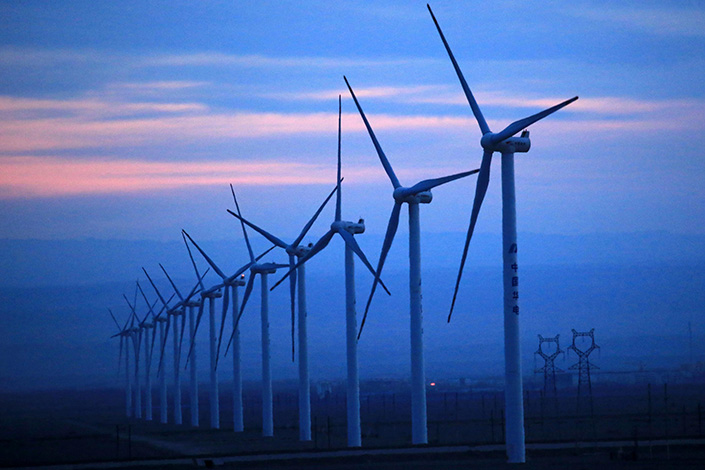 The Chinese government is trying to get renewable-energy companies on board with a program in which they would get de facto subsidies by selling "green certificates" to their customers. But the companies' response to the program has been lukewarm. Photo: Visual China

(Beijing) — The Chinese government is trying to reduce its own subsidy burden while still supporting the solar- and wind-power industries through the buying and selling of “green certificates.” But at least so far, renewable-energy companies aren’t piling in.

The idea behind the certificates is that renewable sources of energy could get what would be akin to a government subsidy, but through private companies that want to show their customers they are green-friendly and financially encouraging renewable energy. The buying is set to begin on July 1.

Multinational companies in particular are seen as likely purchasers of the green certificates, which prove that the electricity the companies use came from a renewable source. The government also is looking at offering direct incentives. For example, authorities are considering prioritizing products of companies who buy the green certificates in government procurement lists, Xu Guoxin, an official with the government-linked National Renewable Energy Information Management Center (NREIMC), told Caixin.

Also, the government is weighing whether to set a quota system so energy distributors and power producers in China will be motivated to buy some green certificates, which would encourage the development of cleaner sources of power.

The renewable companies are not required to apply for the certificates.

About 230,000 green certificates have been handed out to 20 renewable-energy projects in the first batch of issuance, the NREIMC announced Monday.

That represents about 23 billion kilowatt-hours (kWh) of electricity, which corresponds to 1.125 gigawatts of installed capacity, according to official data.

But that accounts for only 0.5% of China’s total installed capacity of solar and wind power, which signals tepid demand from energy producers for the certificates.

The government has been looking at how to create a green certificate program for 10 years. It first filled in some details on the rules of the system in February.

Fewer than 10 parties potentially interested in buying the green certificates attended a meeting on Tuesday with renewable-energy companies that have them. Their top-raised issue was what benefits they would get besides brand promotion if they buy, the NREIMC’s Xu told Caixin.

But if it eventually is a success, the green certificate system may help quench wind and solar farms’ thirst for cash, as the government’s subsidy program is running short of money after it lured many investors to rush into the renewable-energy sector, said Peng Peng, a senior researcher with the Chinese Renewable Energy Industries Association.

The government set up a renewable-energy development fund in 2006, which is financed through an additional charge included in electricity fees.

The fund faced shortfalls of about 60 billion yuan ($8.83 billion) by the end of 2016, said officials with the National Development and Reform Commission, China’s top economic-planning agency, and companies eligible to obtain subsidies complained they need to wait for at least half a year before they can actually get the money.

Wind and solar account for just 9% and 4% of China’s total installed capacity of electricity generation respectively.

But more and more, wind and solar generated power has been wasted in recent years. That is because the country faces an overall electricity supply glut, and some technological and geographical challenges remain, such as getting the power into the grid, and the mismatch between where big renewable farms are located and where the most energy is used.

Data from the National Energy Administration showed that 49.7 billion kWh of wind power-generated electricity — enough to meet Portugal’s consumption for a year — went unused in 2016, up from 33.9 billion kWh in the previous year and about 13 billion kWh in 2014.

The potential interest by multinationals in being associated with green energy in China was highlighted by Apple. In December, Apple bought a 30% stake in four wind power projects in China as the U.S. tech giant seeks to minimize its carbon footprint in the country where most of its products are made.

More than 70% of greenhouse gases produced by Apple come from its manufacturing units, and a single factory in central China’s Zhengzhou produces over 70% of iPhones. Apple announced a plan to expand its clean energy investments in China in 2015. The company also said its offices and stores in China were carbon-neutral after the completion of a solar power plant in Sichuan.