Drug Giants Swallow Price Cuts to Get Into China

By Coco Feng and Liu Jiaying 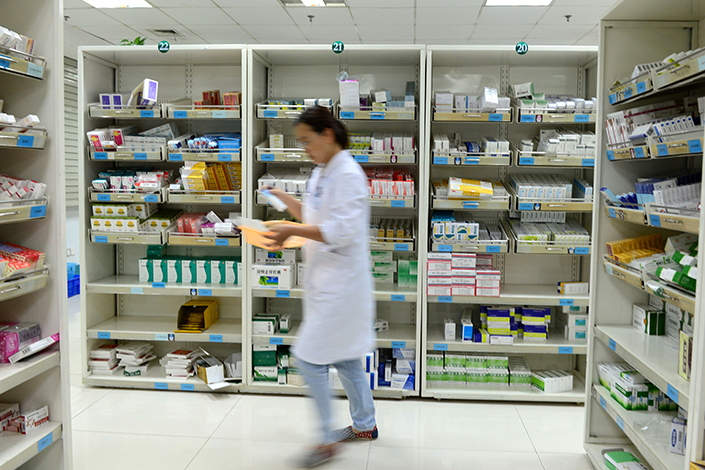 After three months of price negotiations with pharmaceutical companies, China added 36 drugs to its list of medications eligible for partial reimbursement. Above, a pharmacy staff member picks up a patient’s medication at a hospital in Hefei, Anhui province. Photo: IC

(Beijing) — Global pharmaceutical giants such as GlaxoSmithKline PLC (GSK) and Novartis AG have agreed to cut prices in exchange for getting more of their products added to China’s catalog of drugs eligible for partial reimbursement.

The Ministry of Human Resources and Social Security added 36 drugs to the list after three months of price negotiations with pharmaceutical companies. Most of the drugs added to the list are used to treat cancer or cardiovascular disease. At their previous prices, the drugs were difficult for either patients or the government’s medical insurance fund to afford.

The negotiations led the retail prices of the 36 drugs to be cut by 44% on average, according to a ministry statement released Wednesday.

“The drugmakers value the huge China market, which was our largest bargaining chip in the negotiation,” said Xu Yanjun, deputy director of the ministry’s Social Security Center.

Swiss drugmaker Roche AG had four of its cancer treatments drugs added to the list: trastuzumab, known as Herceptin; rituximab, or Mabthera; the bevacizumab injection Avastin; and erlotinib, which is branded as Tarceva.

Once a drug makes it onto the list under the category of partially reimbursable drugs, the government’s medical insurance program picks up about half the cost, though the specific amount varies province to province, a medical insurance expert told Caixin.

Being included on the list helps drive sales, offsetting the revenue that drugmakers lose from the price cuts, said Zhang Jinghan, a pharmaceutical industry analyst at CEBM Group, a subsidiary of Caixin Insight Group.

“For example, ever since Shijiazhuang Pharmaceutical Group’s NBP (a stroke treatment drug) was listed in 2009, its sales have grown by over 50% each year,” said Zhou Jing, an analyst at Guolian Securities.

Other Chinese pharmaceutical giants have had products, including drugs based on traditional Chinese medicine, get partially covered after they got added to the catalog. One example is Yifan Pharmaceutical Co. Ltd.’s blood cancer drug Huangdai.

Of the newly added drugs, 31 were based on Western pharmacology and five were made from Chinese herbs.