By Yue Yue and Chang Peiqi 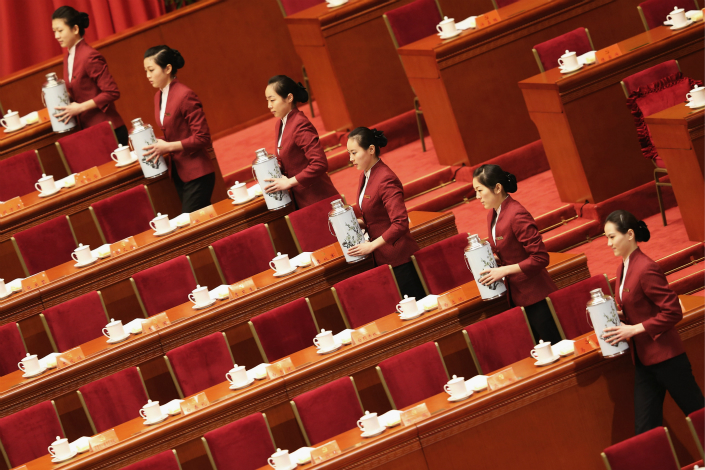 A total of 44 delegates from China’s finance sector will attend this autumn’s 19th Party Congress. Above, attendants stand ready to serve tea before the 18th Communist Party Congress at the Great Hall of the People in Beijing in November 2012. Photo: Visual China

China’s financial regulators, state-owned banks and insurers have elected 44 delegates to this autumn’s 19th Party Congress, where they will help choose the Communist Party of China’s (CPC) leadership for the next term.

Eleven of the representatives work with the central bank and other regulators of the banking, insurance and securities sectors. Twelve others come from state-owned banks.

Three of those representatives work for big insurance companies, and one works for a state-owned financial holding company. The rest are from local financial institutions.

Some 3,000 delegates from the central and provincial governments, the military, universities, state-owned companies and the financial sector will be elected to the national party congress, which is held every five years in Beijing.

The party congress will elect nearly 400 members and alternate members to the CPC Central Committee, which will in turn elect the political bureau and its standing committee, the party’s top leadership.

In July 2012, 42 representatives of the financial sector were elected to the 18th Party Congress.

Here is a list of some of the financial sector delegates to the 19th Party Congress: