Investor Activism on Rise in China 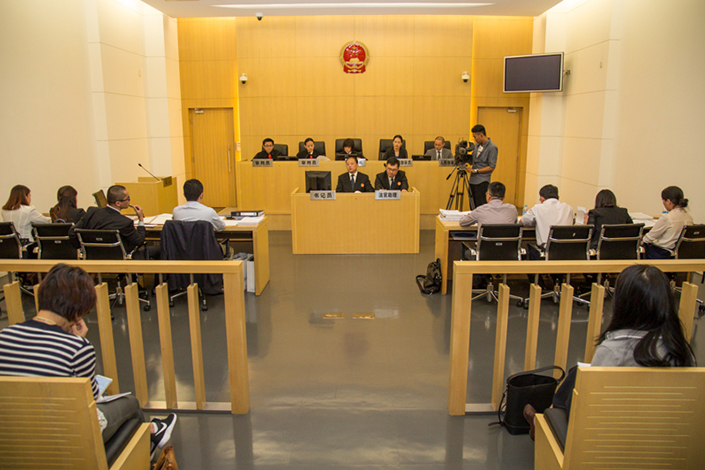 Shanghai No. 1 Intermediate People's Court hears a case involving an alleged stock trading fraud on Sept. 16, 2015. The court has witnessed a surge in securities-related lawsuits in the past three years. Photo: Shanghai High People's Court

The 68-year-old retiree filed a lawsuit at a Shanghai court that accused a Shenzhen-listed electric drill maker misled him as an investor about a stock-split plan.

The court has received separate lawsuits against the same company from seven other individuals. “The major shareholders proposed a stock split at a board meeting and later voted it in themselves at a shareholder meeting. It was fraud,” Dai said.

A year and a half passed, and the court has yet to issue a verdict.

Dai is among China’s growing class of investors willing to take their grievances to court and demand compensation.

As awareness of investor rights has grown, the China Securities Regulatory Commission (CSRC) has put more effort into policing and cleaning up unlawful practices at listed companies.

In China, securities disputes involving allegations of misrepresentation rose to 1,109 in 2016, up from 435 in 2015, according to China Judgments Online, an online portal that reports cases of securities fraud. Courts in Shanghai, the home of the country’s largest stock exchange, dealt with 1,567 securities-related disputes in 2016, way up from 557 in 2015.

The rocketing number of cases has led to a new problem: the regulator and courts lack the manpower to handle the surging caseload.

“Over the last three years, we have seen a significant upswing in the number of lawsuits related to securities,” said Shan Suhua, associate chief judge of Shanghai No. 1 Intermediate People’s Court.

Shan told Caixin that the court has heard more than 1,600 securities disputes since the beginning of 2014, almost all of which were related to alleged misrepresentation.

Shan’s court has added two collegial panels and eight judges, but everyone still works overtime to handle the cases.

Helping investors file class-action lawsuits might be the solution — or so the regulator believes.

Shanghai has launched a pilot program to aggregate disgruntled investors and help them litigate. The rationale: reduce the number of cases as well as the court’s workload, and increase the efficiency of the legal process and potentially the amount of compensation. Both are likely sufficient incentives for listed companies to stay clean.

The CSRC-backed China Securities Investor Services Center (ISC) in Shanghai has completed two cases since its inception in 2014. This free service rose to fame among investors after it won 2.33 million yuan ($344,480) in compensation for 14 investors.

The class-action case was filed against a notorious market speculator Xian Yan, 42, who regulators said misled investors about the nature of a company’s business and manipulated the share price of the company he controlled.

Another notable class-action lawsuit in Chinese corporate history happened in 2015.

“Even for a large-cap company (like Foshan Electrical), compensation of 180 million yuan hurts,” said Xu Feng, a lawyer at Shanghai Huarong Law Firm.

Another lawyer, Xie Liang from Guangdong Huanyu Jingmao Law Firm, added: “Some companies never imagined that the amount of compensation could grow so large.”

Legal experts believe potentially high compensation explains the growing popularity of class action lawsuits, as well as the willingness of investors to go through the entire legal process.

In China, investors do not have the legal rights to seek securities dispute-related compensation from a company until the securities regulator rules that the company has broken the law. Investors could easily have to wait for years before justice is done. The situation is different in the U.S. and Europe, where investor actions are not linked to regulatory decisions.

It has long been said that corporate misdeeds are low-cost crimes in China. For instance, the CSRC typically hands down fines of a few thousand yuan — even in cases where profits are inflated by as much as 1 billion yuan.

Class-action lawsuits raise the cost of non-compliance or committing corporate crimes, which will help enforce discipline in the market, legal experts said.

Caixin has learned from the CSRC that the regulator and the Supreme People’s Court are considering drafting guidelines on class-action lawsuits, and may even include the ISC in the Securities Law.

Shan from the Shanghai court believes that by writing the ISC into the law, the class-action system will immensely improve the quality of listed companies and the quality of investors.