Chinese Shipbuilders May Slip Deeper Beneath the Waves 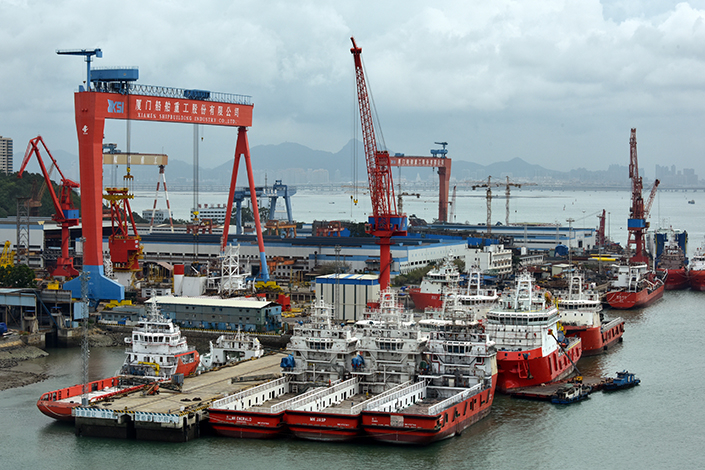 Chinese shipbuilders received new orders totaling 11.51 million deadweight tons, down 29% from the same period in 2016, while their order backlog dropped 30.5% from a year earlier. Above, ships are seen on the docks of Xiamen Shipbuilding Industry Co. Ltd. in Haicang district of Xiamen, Fujian province. Photo: Visual China

During the first six months of this year, Chinese shipbuilders received new orders totaling 11.51 million deadweight tons, down 29% from the same period in 2016, according to figures that the China Association of the National Shipbuilding Industry released Friday. Deadweight tonnage is how much a ship can safely carry, not the weight of the ship itself.

The order backlog held by Chinese shipyards also dropped 30.5% from a year earlier to 82.84 million deadweight tons, the association said.

But China also completed construction of vessels with a combined carrying capacity of 26.54 million deadweight tons during the first half of this year, up 57.4% from a year earlier, it added.

“By 2019, idle capacity will likely go up significantly, with some shipbuilders operating massively below their capacity and facing serious challenges in continuing production,” the association said.

Overcapacity and slowing global economic growth have been hitting the global shipping industry hard. According to a recent report by Clarksons Research, the number of actively producing shipyards worldwide has dropped to 372 from 931 at the beginning of 2009.

Chinese shipyards are facing additional pressure from the government’s deleveraging campaign, which makes it harder for the yards to refinance their respective debts.