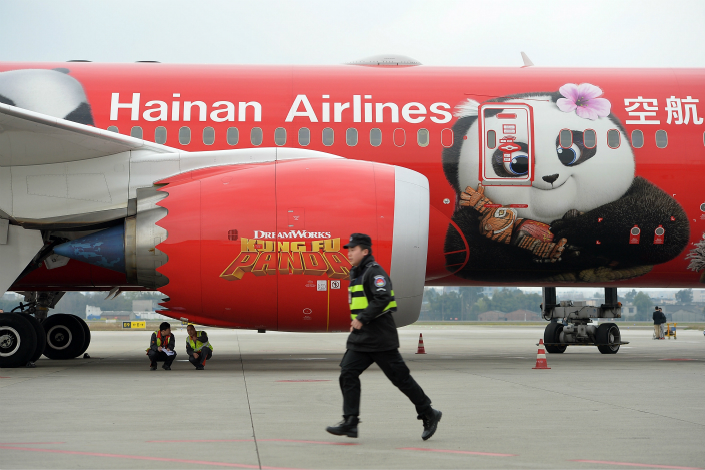 HNA Group, owner of Hainan Airlines, discloses the identities of its major shareholders as speculation swirls about the nature of its ownership structure. Photo: IC

HNA Group, one of China’s most acquisitive overseas buyers over the last five years, counts two charitable arms as its largest shareholders, while two of its founders are also major stakeholders, according to an emailed document released companywide.

HNA released the information as speculation swirled about the nature of its stakeholders and source of its funds, following its multibillion-dollar spending spree of the last few years. Its string of offshore deals has ranged from its $6.5 billion for 25% of hotel giant Hilton Worldwide, to its $6 billion purchase of U.S. computer parts distributor Ingram Micro, both last year.

The company’s two largest stakeholders are both charitable funds, one based in China and the other outside, according to documents released within the company and seen by Caixin. The larger of those, Hainan Cihang Charity Foundation Inc., holds 29.5% of the company. That entity was only recently formed, and the shares it now holds were previously owned by Guan Jun, according to commercial records seen by Caixin.

The other largest shareholder with 22.75% of the company is a foundation based in Hainan province, HNA’s home. After that pair, two co-founders, Chen Feng and Wang Jian, are the next largest stakeholders, each with about 15% of the company. The remaining shares are split between various other co-founders and board members, according to the documents.

In a message accompanying the shareholding note, HNA recounted how it evolved from a small company on tropical Hainan Island in 1993 to its present form as a major investor with interests in tourism, aviation, logistics and finance.

“HNA’s share structure is designed to overcome disturbances and other challenges that may confront the company,” it said in the statement. “Making top executives into shareholders incentivizes them to work hard for the company, creating consensus, participation and benefits for everyone. At the same time, when a stakeholder leaves or passes away, an incentive system encourages them to donate to the charitable funds, so that wealth and power can’t be passed on, providing benefits to everyone.”

Companies like HNA, insurance giant Anbang and property and entertainment conglomerate Wanda Group have come under the microscope recently for their overseas spending on a wide range of assets, often costing hundreds of millions or even billions of dollars. That spending has drawn increasing attention from Beijing, which wants to stem capital outflows and also stop companies from taking on too much debt with speculative buying.