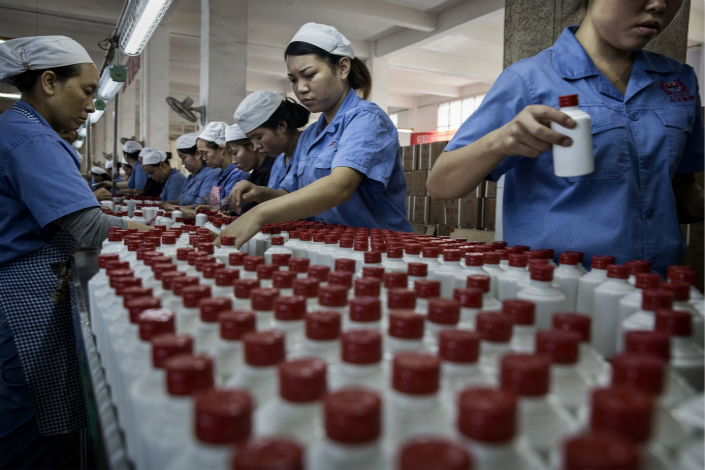 As business-related drinking has made a comeback in China, the stock price of baijiu-maker Kweichow Moutai Co. has continued to climb. Above, workers arrange bottles of baijiu at the Kweichow Moutai plant on Sept. 22 in Maotai, Guizhou province. Photo: Visual China

But market data show that some institutional investors had recently sold down Moutai shares and taken profits, signaling some fund managers might have found the stock overvalued. However, as more retail, individual investors jump on the bandwagon, the stock continues to climb.

Moutai’s fortunes are boosted by a return of business drinking after a years-long government crackdown on graft, analysts say. The company, whose sales are mostly domestic, posted a profit of 6.12 billion yuan ($906 million) in the first quarter, up 25.24% from a year ago.

The Shanghai-listed manufacturer of baijiu extended gains and closed up 0.03% at 477.96 yuan on Tuesday. Its market cap now stands at $88.90 billion, still the world’s most valuable listed liquor maker. The stock has gained 127% since the beginning of 2016.

The world’s second-most-valuable liquor maker is still Diageo PLC, which owns the brands Johnny Walker and Guinness. It has a market cap of $73.68 billion.

According to financial information provider Wind, in the quarter ended March 31, a total of 35.96 million Moutai shares were held by mutual funds, down 3.4% from the previous quarter ended Dec. 31.

But the recent expansion of Moutai’s shareholder base indicates that investor appetite has yet to wane. As of the end of March, Moutai had 680,000 shareholders, up sharply from 380,000 as of the end of December.

A Caixin calculation also found that in the second quarter, 456 of the shareholders were investment funds, of which 150 funds acquired Moutai shares within the quarter.

Most brokerages still assign Moutai a target price that is higher than even today’s closing price. Bold calls include China International Capital Corp., which sets Moutai at 613 yuan per share. Bearish estimates include Essence Securities Co., which targets Moutai at 452 yuan.