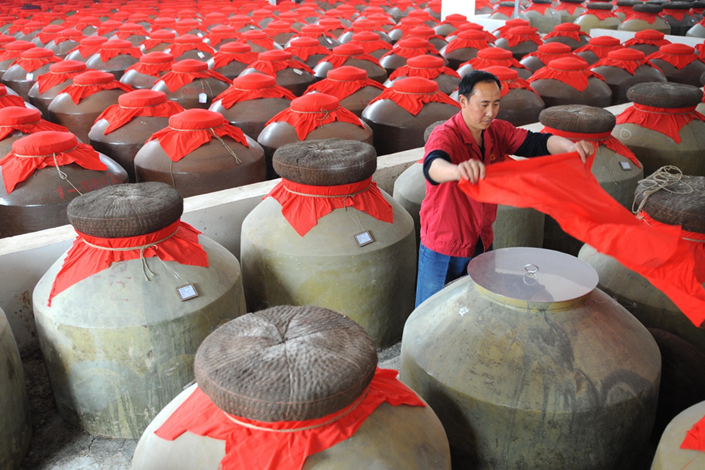 A worker seals liquor tanks in Mianzhu, Sichuan province, in May 2009. Photo: Xinhua

(Beijing) — Chinese liquor makers are seeing sales rebound after three years of declines amid a government crackdown on graft, thanks to a rising middle class and reform within the sector.

Before reporting revenue for 2016, the front-runner in terms of market value in the baijiu sector, Kweichow Moutai Co., forecast a 17% year-on-year gain for the first quarter of 2017.

Other distillers have shown a better-than-expected performance, with Wuliangye Yibin Co. Ltd. recording sales of over 70 billion yuan ($10.2 billion) in 2016, up 8% year-on-year. Sichuan Tuopai Shede Wine Co. Ltd. expects its 2016 net profit to grow tenfold from a year earlier, and Sichuan Swellfun Co. Ltd. said it expected to see its net profit grow 160%.

The high-end liquor industry, which soured after the central government began a nationwide anti-graft campaign in 2012, appears to be rebounding as consumption shifts from official to individual use.

“With growing health concerns, increasing income levels and changes in attitudes to consumption, Chinese consumers are starting to drink better-quality products, which has resulted in a higher volume growth in premium baijiu, and consequently has inflated average unit prices,” Zeng said.

By Friday, prices of some popular brands, such as Moutai, Wuliangye and Swellfun, had increased by 8.8% on average within one week on online stores on JD.com, according to a report by financial services firm Northeast Securities.

Increasing costs of raw materials, packaging, labor and transportation have largely affected the profit margins of liquor manufacturers, which has compelled them to increase prices, Zeng said.

Meanwhile, reforms allowing employees of distillers and their distributors to own shares in the companies have contributed to higher productivity and profitability.

Xiao Zhuqing, general manager of baijiu company Shandong Wenhe Alcohol Co., Ltd., told Caixin that ownership reform is a future trend within the sector that will allow distillers as well as distributors to share profits and losses, which will improve cooperation.

Baijiu is expected to see retail value growth of 6% in 2017, but overall consumption volume is likely to remain stable due to a gradual shift among young consumers away from the existing traditional drinking culture, Euromonitor’s Zeng said.