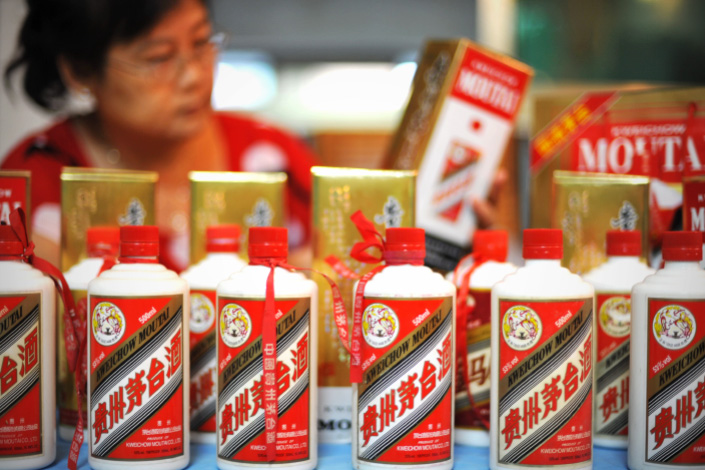 Bottles of Moutai, a famous distilled Chinese liquor produced by Kweichow Moutai Co. Ltd, are displayed in a store in Qionghai, Hainan province, in August 2013. As one of the most popular spirits at state banquets, Moutai has branded itself as the "national liquor" for years. Photo: IC

The Trademark Office of the State Administration for Industry and Commerce said that the term might be taken to mean Moutai was the best liquor in the country, which would violate trademark laws and adversely affect fair competition, according to a SAIC document released by Qianjing Wanwen, an intellectual property agency in Beijing representing a concerned party in the case.

The Trademark Office did not publish any details of the case on its website. A staff member there told Caixin that details of the decision will be sent directly only to concerned parties.

As China’s leading baijiu brand, Moutai has used “national liquor” in various advertisements and marketing campaigns for years. It has applied repeatedly to secure the term as part of its trademark since 2001, but had been rejected outright nine times.

Some of Moutai’s competitors have applied to use the term “national liquor” in their trademarks, but none has received approval.

Moutai can ask the Trademark Office to review its application within 15 days of submission.