China Powers Ahead With Electricity Reform 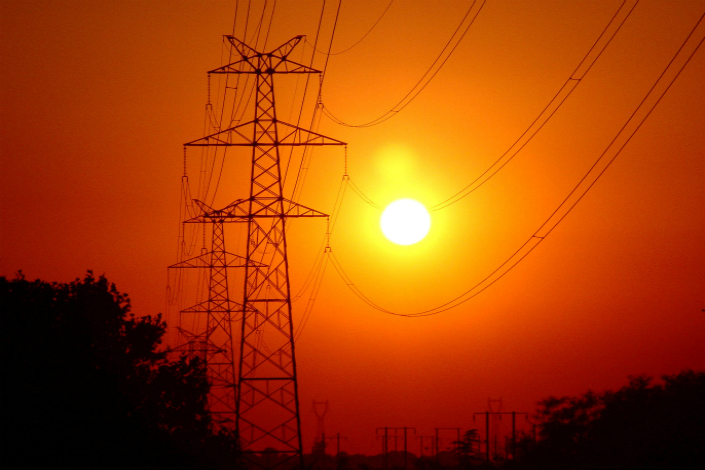 The amount of electricity sold through so-called direct trading should increase to 35% of total consumption this year, according to an official with the National Development and Reform Commission. Above, high-voltage power lines are seen in Zhengzhou, Henan province, in August 2004. Photo: Visual China

(Beijing) — China is aiming to almost double the share of electricity sold this year through market-based mechanisms such as direct sales and centralized auctions as the country pushes ahead with liberalizing its power sector to cut prices and boost efficiency.

The amount of electricity sold through so-called direct trading should increase to 35% of total consumption this year, up from 19% in 2016, according to Wang Qiang, an official with the economic system reform department of the National Development and Reform Commission, the country’s powerful economic planning agency that’s a key player in the ongoing reform of the industry. Wang’s comments were reported Tuesday by the official Xinhua News Agency.

China started the latest round of reform to the electricity market in 2015, when the ruling Communist Party and the State Council, China’s cabinet, issued what’s known as Document No. 9 on overhauling the inefficient and monopolistic power sector — “Opinions on Furthering Reform of the Electricity Market.”

Under the plans, the electricity market would be liberalized through a series of measures that included loosening controls over the pricing of electricity, opening the power distribution and sales business to private investors, building independent electricity trading platforms, and abandoning “in an orderly manner” the traditional power generation and supply planning that is mostly controlled by the government.

The current system involves thermal coal-fired generating plants signing annual contracts with the two state-run power grid operators based on consumption the previous year and forecast of demand for the current year. Power producers have to sell electricity at prices set by the grid companies under the supervision of the government. But given the monopoly status of the grid operators, prices have sometimes been unreasonably high.

Slowing economic growth and overbuilding of new power plants has led to a glut of electricity supply, but the pricing system has not responded to the change in the market and has meant that electricity costs for end users have not fallen. The system has also thwarted the government’s environmental-protection and energy-conservation drives because it stifles competition between inefficient energy-intensive power-generating plants and more-efficient producers of cleaner electricity.

Since the No. 9 document was released, dozens of electricity trading centers have been established across the country where power-generating firms negotiate supply contracts directly with end users such as large industrial companies or distributors. The prices they agree are often much lower than those set by the government.

But these contracts often do not include mechanisms for adjusting electricity prices according to fluctuations in demand at peak and off-peak times during the day, which means users may be paying too much for their power during some periods and too little during others. They also work against China’s booming renewable-energy sector because the amount of power generated from solar and wind sources varies during a 24-hour period, and much of the electricity they produce is wasted.

But they may get some help as the government sets up a system for spot trading of electricity. The State Council in November issued its 13th Five-Year Plan for the development of the power industry, which covers the 2016-20 period, setting a goal to launch a trial program for spot trading by the end of 2018 and rolling it out nationwide in 2020.

Liang Changxin, a senior official with the National Energy Administration, which is part of the NDRC, said at a briefing on Tuesday that the government hopes to build an electricity market in which prices are decided by spot trading and risks are hedged through medium- to long-term contracts, according a report on Wednesday in the Shanghai Securities News, which is owned by Xinhua.

“Establishing a spot market for electricity transactions will be an extremely significant development,” he said. “It will help find the (right) price for electricity through market-based mechanisms, optimize the allocation of resources and promote the consumption of renewable energy.”