By Zhang Nanqian and Li Rongde 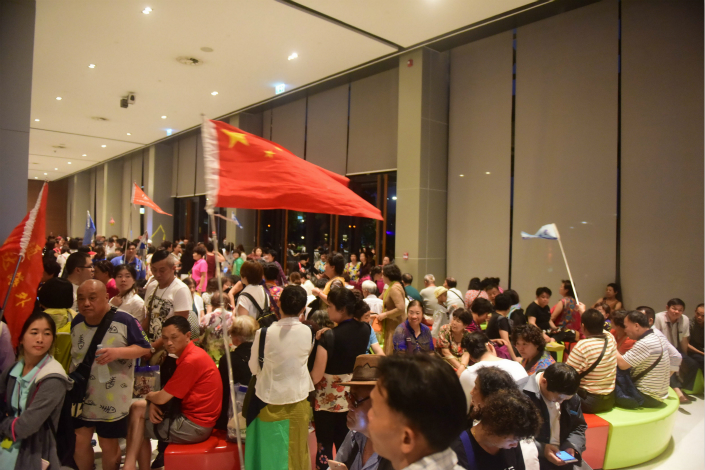 Some tour guides in China sell package tours for as little as 40 yuan ($5.92) per person, only to then pressure their clients into buying things at stores where they receive a commission. Chinese tourists shop at the King Power duty-free store in Bangkok on March 13. Photo: Visual China

(Beijing) — Five Beijing tour guides were jailed for up to a year for forcing clients on a discount tour to cough up more money than what was agreed upon half way through the trip.

The verdict comes as Beijing’s tourism watchdog mulls measures to tighten scrutiny over travel agents and weed out those offering dirt-cheap trips way below cost.

The group of tour guides were selling one-day packages for as low as 40 yuan ($5.92) per person in some instances and then forcing tourists to pay more during the tour, according to trial documents released earlier this month by Beijing’s Changping District People’s Court.

The group had been operating in Beijing from December 2015 to September 2016, according to court papers.

Police detained the three men and two women in September, days after a video clip showing one guide slapping a tourist inside a tour bus went viral on Chinese social media.

A scuffle broke out inside the tour bus on September 17, 2016, when the guide resorted to “intimidation” and the use of “violence” to force 10 tourists to pay a total of 1,720 yuan in addition to the sum they’ve already paid.

The guides were charged with “forcing others to trade,” a crime punishable by up to three years in prison under China’s criminal code.

China’s National Tourism Administration barred travel agents from selling zero-expense and below-cost package tours in 2009, but that has done little to curb the practice. Many tour guides still lure in travelers with low-cost packages and then make stops at designated stores that offer guides a commission based on how much tourists spend there.

Demand for one-day tour packages to major attractions in Beijing, including the Great Wall and Ming tombs, has been on the rise in recent years, but the lack of resources to enforce tourist protection laws have left visitors vulnerable to unlicensed operators, said Song Yu, director of the Beijing Commission of Tourism Development.

The commission has released guidelines, set to take effect on August 1, to crack down on unlicensed travel agents and those who rely on illicit practices in the capital.

Law enforcement officials should specifically target operators who promote below-cost tour packages, alter or shrink itineraries after a tour has started to reduce costs, or dupe tourists with misleading advertisements, the guidelines said. Guides who force tourists to join other undersold tour groups should also be punished, it said. But the guidelines do not specify any punishments for violators.

Coaxing bargain-hunting tourists to buy overpriced souvenirs has long been a problem in China. In January 2014, an unlicensed tour guide in Lijiang in the southwestern province of Yunnan was fined 10,000 yuan — and his employer was fined 300,000 yuan — after he was filmed unleashing a torrent of verbal abuse on tourists who refused to make purchases at several designated shops.