For Chinese Traveling Abroad, Spending Shifts From Shopping to Sightseeing

By Yang Rui and Pan Che 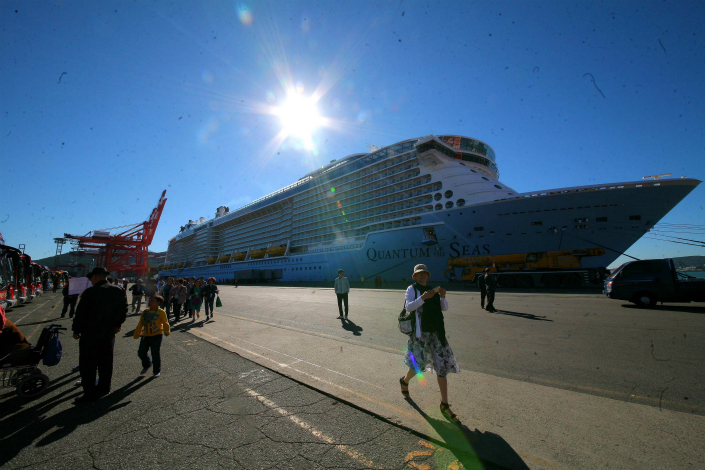 A new report shows that shopping has become a less-important reason for mainland Chinese to travel overseas, while leisure and entertainment have become bigger priorities. Above, Royal Caribbean’s Quantum of the Seas is docked in Shanghai in October 2015. Photo: Visual China

(Beijing) — Chinese travelers are becoming more independent, organized and interested in leisure and culture than in shopping, which used to be their top priority when going abroad, a new industry report said.

Sightseeing was the No. 1 reason that Chinese tourists traveled overseas in 2016, according to a report published by consulting company Olive Wyman. Leisure and entertainment overtook shopping as the second-most-popular reason for traveling abroad. Shopping fell from the No. 2 spot to No. 3 due to the decline in the “daigao” business, in which Chinese living or traveling overseas buy foreign goods for resale in China.

Overseas shopping expenditures included daigou spending, shopping for friends and shopping for oneself. Of those three categories, daigou spending declined the most. Its share of average travel spending dropped 5 percentage points to 3% in 2016 due to a takeoff in cross-border e-commerce and a smaller price gap between goods bought in China and those purchased in other countries.

Spending on shopping shrank on an annual basis, even as overseas Chinese tourists spent more abroad.

“Chinese tourists are shifting their focus to more-meaningful experiences such as enjoying food, culture and even taking part in adventurous sports hikes,” said Hunter Williams, a partner at Oliver Wyman and the author of the report. “Meanwhile, with the rapid development of cross-border e-commerce, they can buy goods from all over the globe without leaving home, leading to a decline in daigou sales.”

The report showed that mainland tourists have been becoming more independent when planning their trips. Consequently, the appeal of travel agencies, which once played an important role in helping mainland tourists plan their trips abroad, has diminished. Travel agencies planned only 2% of the overseas trips taken by Chinese in 2016, while nearly 75% of the travelers planned their own overseas trips.

International news can quickly go viral in China, and crises, tragedies and political controversies can have a near-immediate impact on visitor numbers, the report said. In 2016, South Korea lost its position as the No.1 destination for mainland tourists after China and South Korea got into a dispute over South Korea’s planned deployment of a missile defense system. The number of mainland tourists visiting South Korea dropped 3% year-on-year in 2016.

By contrast, Japan became a more popular destination for Chinese tourists, with a 4% increase in mainland tourists visiting the country in 2016.

Despite the decline in shopping spending, the trend of Chinese tourists traveling further abroad offers an opportunity to the hospitality industries. “Chinese tourists are spending more nights overseas, and this can boost revenue for hotels and restaurants,” Williams said.

Williams advised foreign companies that want to attract Chinese tourists to increase their presence on Chinese-language travel platforms such as Mafengwo and Tuniu, which mainland tourists use for reviews and information to plan their trips.

Williams also suggested that they diversify their services. “Backpackers, business travelers and travelers in tour groups have different demands for their trips.” he said.