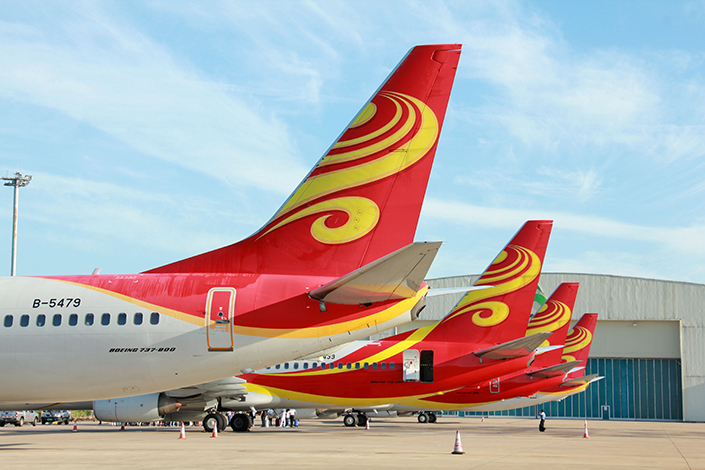 HNA’s failed tie-up with a U.S. satellite services provider comes at a time when big global Chinese buyers are under pressure from Beijing to scale back their huge volume of overseas investments. Above, four airplanes belonging to HNA subsidiary Hainan Airlines await passengers in Hainan province in September 2015. Photo: Visual China

Satellite connectivity services provider Global Eagle Entertainment Inc. said it was terminating a tie-up to form a joint venture and receive up to $416 million from a unit of HNA Group after failing to receive clearance from the U.S. national security regulator.

The agreement’s cancellation marks a major blow for Global Eagle, and also comes as big global Chinese buyers like HNA and Wanda Group are coming under pressure from Beijing to scale back their huge volume of overseas investments, many worth hundreds of millions or billions of dollars.

The scrapping of the deal could also signal the new administration of U.S. President Donald Trump may give greater scrutiny to such cross-border tie-ups in the high-tech and communications realms.

New York-listed Global Eagle said the two sides decided to scrap their agreement after failing to get clearance from the Committee on Foreign Investment in the United States (CFIUS), the agency that must clear all such deals for national security consideration, according to a stock exchange filing late on Tuesday. It did not say that CFIUS had vetoed the deal, but only that it was unable to get the necessary approval by a deadline set between the two parties.

“As a result of this termination, the other related agreements that we entered into in connection with the (HNA) investment agreement … also terminated in accordance with their terms,” Global Eagle said in the statement. “The company and HNA continue to discuss opportunities to expand their relationship in the Chinese market for inflight-entertainment-and-connectivity equipment and services.”

Global Eagle and HNA first announced their tie-up in November, which included the formation of a joint venture to provide inflight entertainment and connectivity in China and would exclusively service aircraft operated by HNA’s Hainan Airlines Co. Ltd. As part of the tie-up, a unit of HNA was set to initially invest $103 million in Global Eagle, and eventually bring the total up to $416 million.

Global Eagle shares have lost more than half of their value since the original deal was announced. In May, the company said it had fallen out of compliance with Nasdaq Stock Market listing rules by failing to file its first-quarter report on time, and that it also remained delinquent in filing its annual report for 2016.

HNA and other major overseas Chinese buyers have also come under pressure recently from Beijing to curb their spending this year. Earlier this week, HNA, which is based on south China’s Hainan Island, took the unusual step of disclosing its shareholding structure in response to similar pressures to be more transparent about its ownership and funding sources.