By Aries Poon and Yang Ge 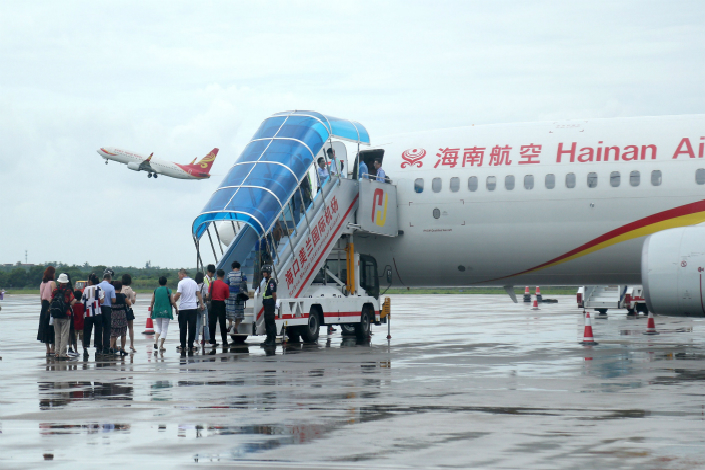 HNA Group, the parent of Hainan Airlines, has seen banks that once had supported its overseas shopping spree stop extending it new loans. Photo: Visual China

For HNA and other Chinese companies labeled by the government as “acquisitive” or “irrational buyers,” offloading assets and reducing their debt load appear to be the highest of priorities.

It is especially true when domestic banks are reportedly acting in concert with the government by turning off the funding tap.

On Wednesday, conglomerate HNA Group Co. decided not to pursue a $416-million tie-up with New York-listed satellite connectivity service provider, Global Eagle Entertainment Inc., after the deal failed to get regulatory clearance from the U.S.

The news followed a media report that said several Chinese banks that had supported HNA’s overseas shopping spree over the last few years have decided to stop extending new loans to the conglomerate. Lenders pulled back after regulators asked them to assess their credit-risk exposure to a list of companies that have indulged in overseas acquisitions, such as HNA, according to media reports.

HNA has hired Goldman Sachs to prepare for a U.S. listing of Pectera, an information-technology outsourcing unit that the Chinese conglomerate acquired from Blackstone for $675 million last year, another report said. By spinning off one of its largest assets in an initial public offering in the U.S., HNA could reduce its debt load substantially.

“The deleveraging trend for these conglomerates will be a good thing if the ultimate goal of reducing risk in the financial system is achieved,” said Ryan Roberts, an analyst at MCM Partners.

A record capital exodus in 2016 has unnerved the Chinese government and regulators, which were already uneasy with companies’ overseas shopping sprees, as well as how the deals were funded by easy credit from both within and outside the formal banking system. Outflows also weakened the Chinese yuan — the backbone of trade and economic growth.

Heightening scrutiny of overseas deals is one of Beijing’s top policy priorities this year, as the country urgently needs to wind down easy money that has fueled economic growth but has also dangerously bloated the financial system.

Chinese President Xi Jinping reportedly signed off on a decision to bar state-owned banks from making new loans to Dalian Wanda Group for clinching deals abroad. Wanda has made headlines globally since taking over the world’s largest cinema chain, AMC Theatres, for $2.6 billion in 2012.

Earlier this month, Wanda unveiled a plan to offload $9.4 billion worth of hotels and theme parks. At first, all those assets were sold to a single buyer Sunac China Holdings. Later, the deal was restructured by introducing a second buyer, R&F Properties, to take over Wanda’s hotels so that Sunac won’t be overleveraged.

Last month, Fosun, another company that was active in overseas dealmaking, unveiled a plan to spin off Israeli subsidiary Sisram Medical Ltd., controlled by its pharmaceutical unit, for a listing in Hong Kong.

Beijing’s clampdown seems to be working. China’s nonfinancial outbound direct investment during the first half fell 45.8% from the same period in 2016. The yuan has also recovered its losses from early this year.

“I think recent moves by Beijing to address the leverage of certain highly acquisitive groups will send a dual message to the market: M&A without a good reason is frowned upon, and the government won’t be standing by to bail out companies that overextend themselves,” Roberts said.